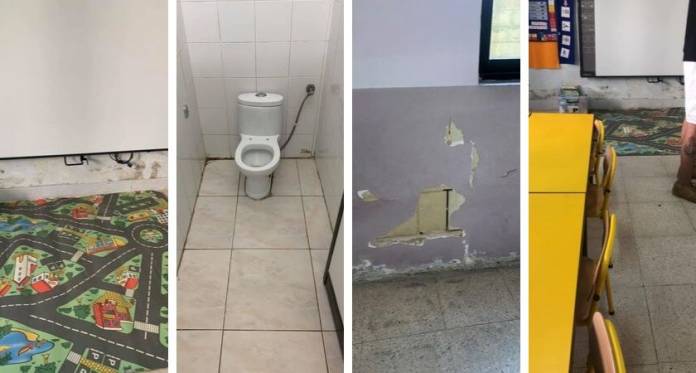 The Education Minister Evarist Bartolo has said he cannot understand why people were brought to an area that was still undergoing maintenance. This was announced in a Facebook post about a classroom at Saint Theresa school in Santa Venera.

Minister Bartolo said that the media coverage was exaggerated over something that was nothing. He explained that the maintenance work was scheduled to take place in the summer, prior to kindergarten children attending the class. The children had not yet entered and the particular classroom was set to be completed by the end of this week. He insisted that the work should not be done all at once.

The news broke when a concerned mother posted images on Facebook which she had taken where her child will attend class in the first year of Kindergarten, the following Tuesday. They first saw the classes from the higher grades, which had just been cleaned and furnished. Some parents had asked to see the classroom where their children would be studying in, which is where they discovered it hadn’t been completed. After the parents insisted, they were shown the classroom.

Once they entered the classroom, the mother describes that there was a strong smell of mould and the toilet smelled as if something had died. She adds that the toys were coated with mould.

The concerned mother added that the parents had spoken with the Principal who explained that the mould was coming up from the ground because of the humidity. The problem could not be solved quickly she was told. The parents then offered to go themselves clean and arrange the class of children, with their own money. Claiming that their goal is that their children have a safe and clean environment, their help was refused.

In a statement, the Ministry said that the work on this class is part of the works that will be completed within the school prior to the children entering the Kindergarten. Among the works performed in the school are plastering and painting of two corridors in the lower level and five classrooms, five Kinder 2 classes and ongoing works on the corridors. They were also new offices for secretaries, a new boardroom, a new kitchen bench in the breakfast room, new tables and chairs in a number of kinder classes, and new windows on the second floor. Works will also start on the inner part of the playground. The scaffolding was being erected for this purpose.

The Ministry clarified that the space used by kindergarten children is not yet being used. The works on the classrooms and the corridor which the controversy had arisen were, in fact, already underway.  The classrooms and the corridor for Kinder 1 will be finished next week. By the time the children come, the plastering and painting should be complete.

The Ministry says that it informed the school’s management to explain this to the parents of the Kinder children.

The ministry explains that this summer saw a number of maintenance and embellishment projects in schools within Qawra, Zejtun, Marsaxlokk, St Julian’s, Hamrun, Blata l-Bajda, Marsa , Zebbug and number of locations in Gozo. There have also been investments in 5210 tables, 7810 new seats and nearly 11,000 new lockers. This also includes having been 23,000 meters of corridors and 636 classrooms white-washed.

There are no tables and chairs in classrooms – UPE

Fresh call for the beatification of Adelaide Cini

Minister for Education not satisfied with AUM

Monique Agius   February 24, 2020
The case happened in December 2016 when an Afriqiyah Airways plane was diverted to Malta.

Amy Borg   February 23, 2020
The government announced that as from this week, thermal screening cameras will be installed at the Malta International Airport, whereby all inbound passengers will be screened for possible cases of coronavirus. This will also be implemented in cruise liner and catamaran terminals.