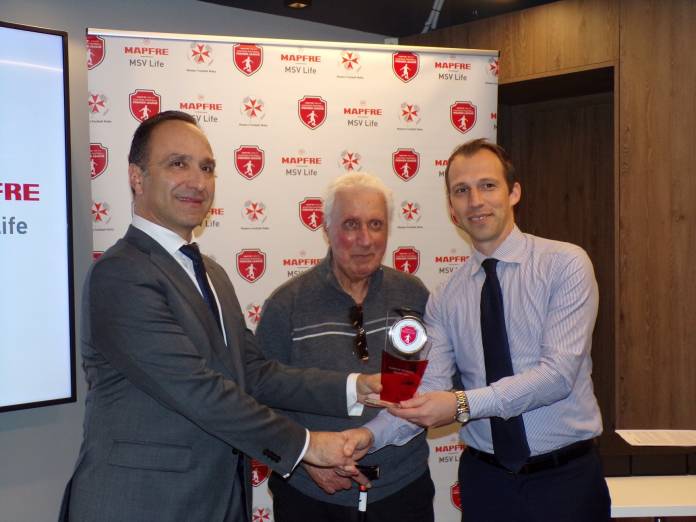 The Masters Football Premier League Players of the Month for October 2019, November 2019 and January 2020 were presented with a trophy to highlight their achievement during a presentation ceremony held at the offices of MAPFRE MSV Life in Floriana.

The trophies were presented by Michael Galea, Chief Business Development Officer at MAPFRE MSV Life to Carlo Leonardi who was voted the October 2019 Player of the Month, Alexander Ribic, Player of the Month for November 2019 and to Steven Sadowski who won the January 2020 Player of the Month award. Also present was Mario Meli, President of Masters Football.

Congratulating the winners, Galea said that MAPRE MSV Life as the sponsor of the Masters Premier League was pleased to reward the players who distinguished themselves during the league. He said that the Player of the Month award was an initiative that MAPFRE MSV Life supported in its efforts to promote sports and encourage and motivate the players who were taking part in the Masters Premier League.

With B’Kara he played in the Qualification round of the Champions League against B36 under coach Stephen Azzopardi and also played in the FA Trophy  final against Valletta.

With Balzan, Hamrun and Tarxien Rainbows he also won First Division titles and gained promotion to Premier Division. He played for nine years with Tarxien years under coaches Jesmond Zerafa, Patrick Curmi, Noel Coleiro and Clive Mizzi when he was voted the best player in the decider against Msida and scored one of the decisive penalties and Tarxien remained in the Premier.

Sadowski studied at De La Salle College and after graduated with honours in Management from the University of Malta.

He now plays in the Masters League with Zurrieq Wolves, the team leading  the First Division and is aiming to  gain promotion and the title of champion. He forms part of National Masters Team and last November scored one of the goals in a friendly game againt a British team.

Alexander Ribic has this season been appointed as player coach of Marsa White Stars. He is the first player that won the Player of the Month award twice, the first being way back in April 2018. This season he is one of the best scorers in the league.

He then came to Malta and signed with Nadur in Gozo where he won the league and was also the top scorer. He then signed for Mqabba, the team promoted to Premier division. He returned back to Gozo playing with Victoria Hotspurs but got injured and had to stop playing football for a while.

When he recovered, he started playing futsal with various teams including Naxxar, White Eagles, Balzan, Lija and Sliema. He also helped Gharghur, Marsa and Pembroke win promotion to the 2nd division.

Carlo Leonardi began his football career at the age of 16 years with Pembroke Atleta. During his career he played with six other teams in the second and third division.  He finished the top scorer in the second division with Qormi and with Pembroke Atleta he twice finished the third division’s top scorer. In his youth, Carlo was part of the U-18s Malta Youth Team.

Carlo stopped playing competitive football at the age of 33 and in his career he played 299 official games and scored 179 goals. During his long career he was only cautioned once with a yellow card and was never dismissed.  In the Masters league, Carlo presently plays with Versity Tal-Qroqq Legends.