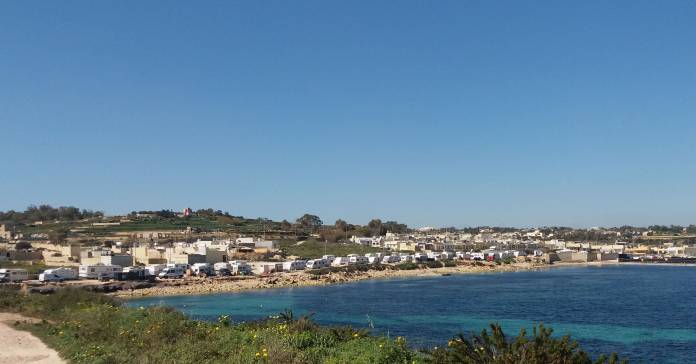 It’s taken months, but the numerous caravans which have taken over St Thomas Bay and the Żonqor area in Marsascala have been given notice to clear the site they are illegally occupying, according to information supplied in Parliament.

It remains to be seen when the sites will be cleared, with Home Affairs Minister Byron Camilleri pledging that the authorities would be following up the matter in the coming weeks.

Camilleri was answering a parliamentary question by district MP Jean-Claude Micallef, who took up the issue after photographs of the caravans in St Thomas Bay made the rounds on social media earlier this month. Though many have been camped on site for months on end, effectively becoming a permanent presence, the presence of various caravans clustered together raised fresh concerns with the arrival of the Covid-19 outbreak in Malta.

On his Facebook page, Micallef reported receiving a number of threats after taking up the matter, describing them as a waste of time as he had “no respect for those who do not respect the public and the areas I represent.”

In his reply to the MP’s question, Camilleri said that the police have long been consulting with various government entities on the matter, and that in recent days, Marsascala district police have affixed notices ordering the caravans’ owners to clear the site.

The law distinguishes between self-driving camper vans and caravans which need to be hitched to another vehicle. The former may be freely parked in public parking places for as long as they are licensed and insured, but the vast majority of the caravans in Marsascala are camper trailers, which are left unhitched.

Such camper trailers may only left unhitched in designated caravan sites, but no such sites exist in Marsascala, making their continued presence a blatant illegality. Micallef has noted, however, that there was the need for such a site in the south of Malta, and has pledged to formally propose the establishment of one.

Work on animal cemetery to begin next year