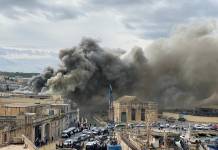 According to a press release sent by the Malta Police Force, several immigrants caused damages in part of the main dormitory of the centre. Following, the centre caught fire which was spread all the way to the gym. The are was taken over by fumes which were visible from various parts of Malta. Residents were evacuated.

11 centre employees and three residents required medical assistance due to the fumes. However, they were in no need to be taken to hospital.

On Tuesday, several immigrants started a “riot” at the Safi Barracks in Ħal Kirkop. 22 of them were taken up to court where they pleaded not guilty. They were remanded in custody.