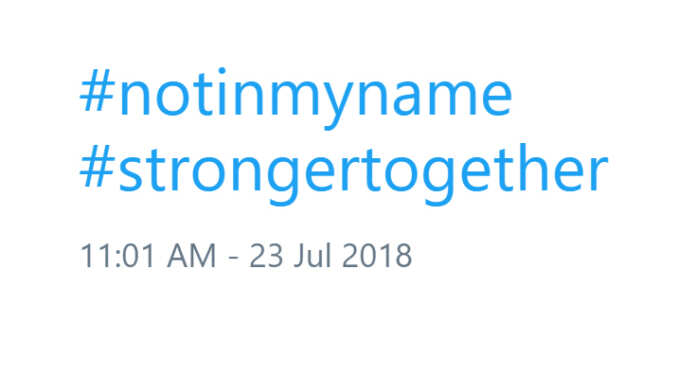 A number of high ranking officials from the Nationalist Party including 10 Nationalist MPs, an MEP and two members of the Administrative Council have either tweeted or posted on Facebook supporting Simon Busuttil. Many of them used the hashtags “not in my name” and “stronger together” on Monday morning.

Members of the European Parliament

Former General Council President and current member of the Executive Council Paula Mifsud Bonnici declared that she would vote against the motion asking for former Opposition and Party Leader, Simon Busuttil, to suspend himself; the same motion which was presented in the Administrative Council meeting on Sunday. In her post, Mifsud Bonnici reiterated that it is illogical to vote against Busuttil. Furthermore she added that Busuttil only requested that the allegations would be investigated so that the truth may surface. Mifsud Bonnici also declared that she will not play into Labour’s hands.

Former Party Treasurer and leadership contender Alex Perici Calascione endorsed the appeal initially posted by the MPs. In his post he expressed his sorrow at the unanimous decision taken by the Administrative Council on Sunday evening. Perici Calascione called out the Administrative Council that on one hand it is asking for the full Egrant inquiry report to be published while on the other hand echoing Muscat’s appeal for Busuttil’s resignation from the parliamentary group.

Perici Calascione appealed against the split of the Nationalist Party and warned that if such thing was to happen this will not bode well for democracy.

Member of Administrative Council will vote against motion in Executive Council

Graham Bencini former Vici-President of the Sliema Sectional Committee and current member of the General Council, President of the Forum of Professionals, member of the Administrative Council and Executive Committee, in a post said that he was not present at the urgent Administrative Council meeting held on Sunday evening, he continued by saying that had he been there he would have voted against the motion tabled as planned to do the same for the upcoming Executive Council meeting.

Meanwhile… Schiavone says in my name

MP Herman Schiavone known for being close to Adrian Delia since the latter decided to run for Party leadership has endorsed the Nationalist Party Leader’s decision by posting #inmyname.

We work together, win together, fight together, & when all else fails, take the fall together.

Division only leads us down an insurmountable slope. Unity in our own diversity is what brought us this far & is what should take us forward. We are & always will be #strongertogether. pic.twitter.com/Ofa34Ec2n0

PN Administrative Decision – Sheer madness Last 24th November, I honestly thought that that would be the last time I…

On Sunday the Nationalist Party held an urgent administrative council meeting following Prime Minister Joseph Muscat’s calls for former Opposition and Party leader Simon Busuttil to resign which were then echoed by the current Opposition leader Adrian Delia, following the publication of the key conclusions from the Egrant inquiry.