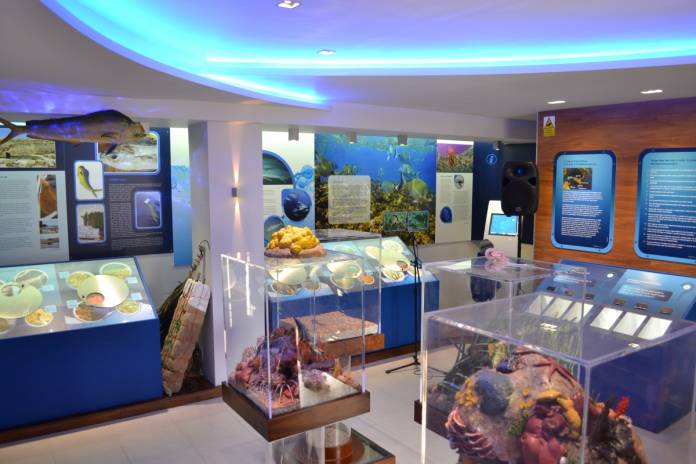 The Dwejra Marine Environmental Education Centre is the winner of the Gozo-Cultural/Social Tourism Achievement Award 2019 organised by the Gozo Tourism Association.

This innovative visitors centre first opened its doors in March 2013 through efforts by Prof. Alan Deidun and his team within the PANACEA project, which was funded within the ambit of the Italia-Malta 2007-2013 Operational Programme I. Apart from the Sicilian partners in the project, the other Maltese partner in the project was the San Lawrenz local council.

A few metres away from Dwejra’s inland sea, Dwejra’s environmental education centre gives the marine protected area its own centre on location where anyone – divers, tourists, swimmers, and children – can learn about what is special about Dwejra’s underwater landscape.

The centre opens up onto a colourful and interactive world, with lots of photography, information boards, and 3D models, or dioramas, recreating specific underwater ecosystems. There is also a screening room currently airing three documentaries on local MPAs, co-produced within the same project by Prof. Alan Deidun and Monolith Limited.

Since opening its doors in March 2013, the general feedback has been positive with more than 25,000 visits. More than 5,000 students also held sessions at the centre to learn more about the importance of Dwejra, ensuring that the implementation of the PANACEA project really resulted in a tangible local legacy in terms of ocean literacy.

This centre is retrievable on Google Maps, Tripadvisor and Facebook where it is has been given high rankings.

San Lawrenz mayor Noel Formosa said the council was committed to keep investing in the centre given its touristic and edutainment appeal.

Reuters   February 24, 2020
Ten people were injured on Monday after a car ploughed into a carnival parade in the western German town of Volkmarsen, police said, adding that the driver had been arrested.

Coryse Borg   February 25, 2020
Carnival 2020 comes to an end today but it leaves behind numerous memories of a fun time which was had by both young and old.

Want to be a future leader? The JCI Malta national debating...