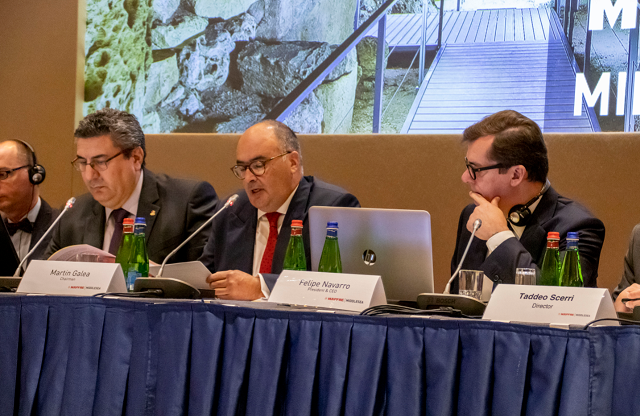 MAPFRE Middlesea Chairman Martin Galea reported another successful year for the company during its Annual General Meeting which took place at the Corinthia Hotel last week. He told shareholders that the company will be paying a dividend of €9.00 million compared to last year’s €9.7 million. He also reported that the company’s solvency and liquidity position remain very strong and all stakeholders can be confident that the company is in a good financial position.

The Chairman reported that during the last 18 months the board of directors have been reviewing the capital requirements of MAPFRE MSV Life, the Life insurance subsidiary of MAPFRE Middlesea which is owned jointly with Bank of Valletta and It was determined that the company had excess capital and a decision was taken to distribute a special dividend. This dividend received in March 2019 will be distributed to the Company’s shareholders as a special interim dividend together with the ordinary final dividend.

Mr Galea said that as far as the operations of the company are concerned, MAPFRE Middlesea continues to perform well, in spite of very high claims. 2018 was a record year in claims.  Mr Galea reported that €42.30m in claims were incurred during the year. He commented “This is our business. We take on the risks of our customers and pay the claim out when adverse circumstances occur. The client is helped when he needs it, and would otherwise face financial hardship be it through accident, weather or health. We managed to maintain our profitability as we reinsure risks when our risk profile is exceeded. In this way, we were able to contain the claims incurred and indeed protect our profitability.”

President and CEO Felipe Navarro presented a full financial and operational report. He said that the company continues to invest in staff, Governance as well as IT.

MAPFRE MSV Life continues to show record results primarily through sales of single premium investments. The company was able to maintain a relatively good return for its investors compared to the market,  at a maximum 2.35% in spite of the prevailing economic situation which militates against safer return-seeking investments. The low-interest rate scenario continues and presents a challenge to the company, indeed to all investors at this time.

MAPFRE Internacional SA owns 54.56% of the Company thus, in effect, MAPFRE Middlesea plc and MAPFRE MSV Life plc are both subsidiaries of the MAPFRE Group. Being part of a global international insurance group means that both entities obtain great support and expertise in a number of areas. This would include training, technical support on underwriting and reserving, increased oversight and controls, technical actuarial assistance as well as assistance in dealing with new regulations especially with regard to Solvency II.

Bank of Valletta own 31.08% of MAPFRE Middlesea and they are significant shareholders in MAPFRE MSV Life with 50%.

Martin Galea appointed Chairman of MAPFRE Middlesea Board of Directors

At the Board meeting convened immediately after the Annual General Meeting, Martin Galea was appointed as Chairman of the Board of Directors of MAPFRE Middlesea plc. The Board of Directors, during the said Board meeting, also re-confirmed and co-opted Nikolaos Antimissaris, from MAPFRE, as a non- Executive Director in accordance with the Articles of Association of the Company and appointed Dr Daphne Sims Dodebier as the new Company Secretary to replace Carlo Farrugia who tendered his resignation.

MAPFRE Middlesea: First to introduce Artificial Intelligence within the insurance industry in Malta

Watch: ‘We need to show that corruption is a punishable offence’ – Matthew Caruana...

Masquerade Malta’s Matilda the Musical prepares for curtains up

Coryse Borg   January 22, 2020
The award-winning Matilda the Musical will be staged by Masquerade Malta at the Mediterranean Conference Centre in April, and tickets are now available. It is already set to be one of the most sought events of the cultural season.

Christoph Schwaiger   January 24, 2020
Former PM Joseph Muscat was found to have breached the code of ethics of ministers but has escaped facing “further action” against him since he resigned from his position, the Commissioner for Standards in Public Life has concluded.