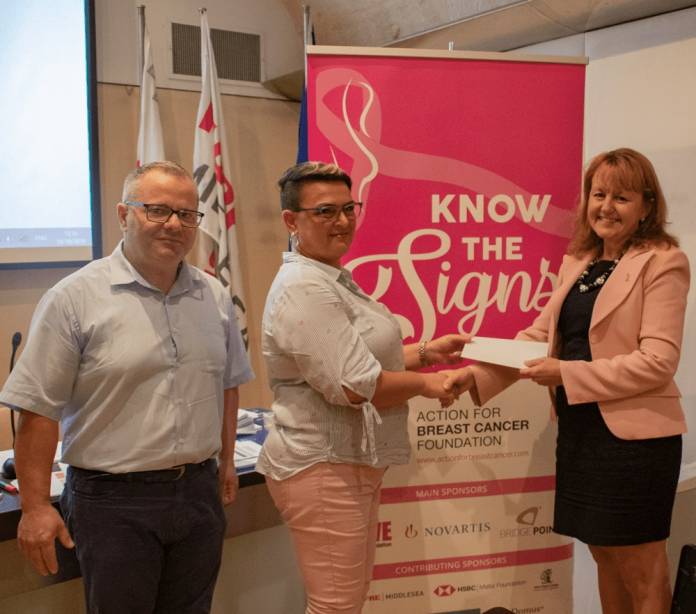 This month, MAPFRE Malta has contributed towards the production of a campaign created by the Action for Breast Cancer Foundation in order to support the initiative and generate awareness for Pink October. The campaign focuses on generating awareness regarding the prevention and/or early detection of breast cancer, emphasizing the importance of regular self-examinations in order to significantly improve the possibility of survival.

Founded by Helen Muscat and Esther Sant, Action for Breast Cancer Foundation is a non-profit organisation which provides support to those undergoing the condition by collaborating with other entities in order raise funds and generate awareness towards the cause.

Two videos called Know Your Body and Know The Signs were produced by Action for Breast Cancer Foundation. The former video focused on the concept of understanding one’s body in order to help detect any changes that may occur in the breasts, emphasizing the importance of early detection in saving your life. The Know The Signs infographic highlighted a number of things to look out for when practicing self-examinations, further emphasising that early detection is key to survival.

In fact, as a result of increased awareness pertaining to the prevention of breast cancer, it has been noticed that there has been an 87 percent survival rate of those diagnosed with the condition as well as a steady decrease in the mortality rate of women suffering from it.

As a gesture of goodwill, the founders of Action for Breast Cancer Foundation delivered a talk for MAPFRE employees which highlighted the importance of early detection through self-examination and leading a healthy lifestyle as a means of preventing breast cancer from occurring. Eating healthy, controlling weight gain, being physically active, avoiding smoking and checking yourself regularly were all highlighted as crucial factors in the prevention of this condition.

In addition, several lapel pins were purchased from the non-profit organisation and were distributed to MAPFRE employees to be worn throughout the month of Pink October.

“It has been a privilege to collaborate with Action for Breast Cancer Foundation and we are eager to continue our commitment in raising awareness towards the cause. It is great to see the level of dedication shown to the work they do, and we are more than happy to continue supporting the battle against breast cancer,” said Ana Cristina Zammit Munro, Chief Officer of Marketing at MAPFRE Middlesea.

Further to this, MAPFRE Malta is encouraging all employees to join this initiative by carrying out breast ultrasound screenings, the cost of which is being covered by the company. “At MAPFRE, we care about the health and wellbeing of our employees. Breast cancer is easily the most common type of cancer among women in Malta. However, it goes without saying that an early diagnosis will improve your chances, and for this reason we are glad to cover the costs of ultrasound screenings for our employees,” said Ines Silva, Chief Officer of Human Resources at MAPFRE Middlesea.

MAPFRE Malta will continue to support the initiative and spread awareness throughout the month.

Experience the transformative power of HSBCnet

Staff Reporter   August 11, 2020
HSBC Malta’s sustained updating of its digital platforms, virtual services and online tools are helping its business customers adapt to change and maintain visibility and enhanced control over their finances.

Watch: Mindset and its effect in a post-COVID situation – Robyn...