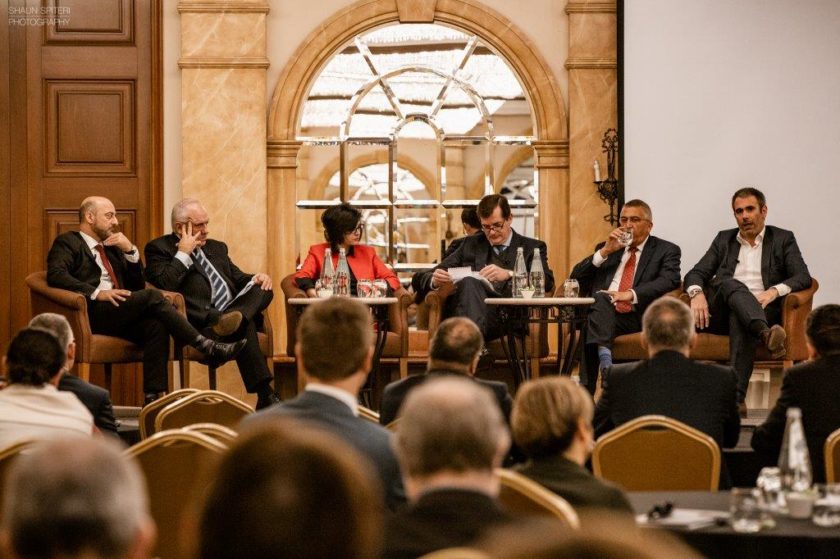 MAPFRE Middlesea and MAPFRE MSV Life in collaboration with The Maltese-Spanish Chamber of Commerce held a Business Breakfast to discuss the recently published Fundacion MAPFRE’s Economic and Industry Outlook Study which predicts that during 2019 there will be a fall in the contribution to global growth from developed markets, while emerging markets are expected to provide a greater contribution to the economy.

The event was opened by Her Excellency The Ambassador of Spain and the keynote speaker was Gonzalo de Cadenas-Santiago, Director of Economic and Financial Research at MAPFRE Economic Research. Key panelists included Kenneth Farrugia, David G. Curmi and Wilfred Kenely, who discussed the repercussions of this forecast in the local scenario, while Felipe Navarro, CEO of MAPFRE Middlesea, moderated the panel.

The research states that the global economy could grow by 3.3% this year, three tenths less than what was expected to be recorded for 2018, as the year will be marked by a slowdown in the global economy, an adjustment which will nevertheless be smooth and orderly.

In Malta, the expectations are that the economy will continue to experience strong levels of growth according to forecasts made by The Maltese-Spanish Chamber of Commerce.

It was further discussed that with regards to the insurance industry, economic implications may also include the possibility of pension schemes being exposed to demographic-related risks. It is probable that the public expenditure pertaining to pensions may increase from 12.5% to 16% in the next 20 years, which as a result, presents the possibility of an increase in the retirement age.

MAPFRE Middlesea p.l.c. (C-5553) is authorised by the Malta Financial Services Authority to carry on both Long Term and General Business under the Insurance Business Act, Cap 403 of the Laws of Malta.

MAPFRE MSV Life p.l.c. is authorised by the Malta Financial Services Authority to carry on Long Term Business under the Insurance Business Act, Cap 403 of the Laws of Malta.

Both entities are regulated by MFSA.

Masters Football Players of the Month presented with awards