A man will be arraigned before a court presided over by Magistrate Josette Demicoli on Saturday morning.

The police were called to assist a 25-year-old man from Eritrea who was reportedly injured. The victim was pronounced dead on site. The man was stabbed to death on Triq Dicembru Tlettax on 29 November. The police had subsequently detained a man from Sudan for questioning. 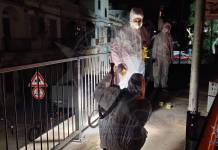 Cedric Farrugia   January 26, 2021
Yesterday two priests were arrested for allegedly molesting an altar boy. The Police started investigating after a report was made by the Curia - Safeguarding Commission.