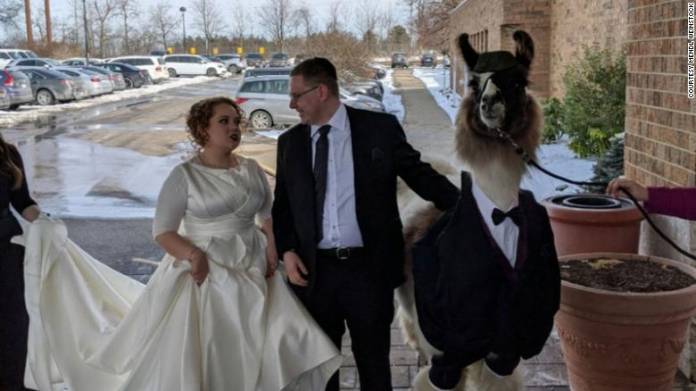 A few years ago, Riva Eisenberg was daydreaming aloud about her future wedding with some friends. She didn’t even have a boyfriend at the time and these musings irked her brother Mendl Weinstock who told her if she made him go to this wedding, he was going to bring a llama with him.

Mendl said that Riva got very upset and told him initially that he couldn’t as it would ruin her special day. But thinking that it was just a joke, she eventually told him that the llama was invited to the wedding after all.

Fast forward five years later. Riva finally got the wedding of her dreams… and her brother tuned up with a llama called Shockey who was wearing a tuxedo that his (Mendl, not Shockey) friend sewed.

Judging by Riva’s expression in the photo above, one can safely say that she was rather miffed at her brother when he turned up with Shockey.

In fact, her brother stated that she said, “a lot of words that are not appropriate in polite company”.

However, thankfully, Riva soon got over it. She said she was glad that he made her wedding memorable, and proceeded to have a great time at the wedding.

Shockey stayed outside of the wedding hall for about 30 minutes, taking pictures with guests.

We can’t wait to see if the tables are turned if Mendl ever gets married! In the meantime, Riva said that she has ‘revenge’ plans for his graduation which is coming up soon.