The lawyer for a 39-year-old Rwandan refugee detained after a fire at the 15th-century cathedral in the French city of Nantes said nothing directly linked his client to the incident.

“To my knowledge, as things stand there is nothing that directly links my client to the cathedral fire. I’d like to remind everyone of the presumption of innocence for my client,” Lawyer Quentin Chabert told reporters on Sunday.

He also said “politicians are meddling in the situation” and that should not prevent a sense of perspective over a fire that had not endangered human life, although it caused significant damage.

Fire breaks out at Nantes cathedral in western France 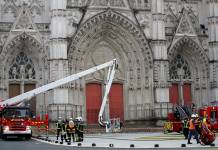 The man, who was not named, worked as a volunteer for the cathedral and had been in charge of locking up the building on Friday night, LCI television said, citing prosecutor Pierre Sennes.

Sennes said the man was being held to clear up inconsistencies in his schedule.

On Saturday, he said three fires had been started at the site and there had been no signs of a break-in. Authorities said an investigation for suspected arson had been opened.

The cathedral’s rector Father Hubert Champenois told BFM TV the man in custody had worked for several years at the cathedral and he trusted him completely.

The fire began on Saturday morning and engulfed the inside of the Gothic structure. Firefighters brought it under control after several hours and extinguished it completely by the afternoon.

It happened just over a year after a fire at the Notre-Dame Cathedral in Paris destroyed its roof and main spire.

Fire breaks out at Nantes cathedral in western France