Italian businessman Antonio Ricci has been extradited to Italy, late Friday evening after a European Arrest Warrant was executed. Ricci is wanted by a Calabrian to answer to charges that he laundered money through his iGaming company. 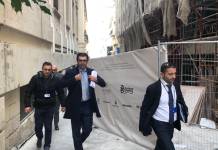 Late last year, Ricci was arrested and fought his extradition, until the charges were amended and accepted to be extradited. He was previously arrested in Malta, however a Court of Appeal turned down the extradition order. The Italian prosecutors had dropped the mafia association charge against Ricci after the first European Arrest Warrant issued against him.

The 43-year-old man was escorted by heavily armed officials from Corradino Correctional Facilities to the airport. Once he landed at Fiumicino, he was taken to a restricted part of the airport.

The Public Prosecutor of Reggio Calabaria had issued precautionary measures against 18 individuals, including Ricci. It also seized 23 foreign companies, 15 operating in Italy, 33 national and international sites, properties, vehicles, bank accounts in Italy and abroad, with the total value amounting to more than €723 million.

Sunrise at the Splendid is a hit; 3 extra performances announced

Coryse Borg   February 20, 2020
After three packed performances of Sunrise and four more this weekend which are also completely sold out, FM Theatre Productions has announced an additional three shows of the critically-acclaimed comedy being performed in the intimate setting of the Splendid in Valletta. The extra shows will run from the 27th to 29th February.

Reuters   February 22, 2020
Cesar started delivering the product, fried and canned by his mother, on a motorbike in 1950 and later decided to open a proper factory, sticking to tins as his main trademark packaging because they preserved the flavour so well.