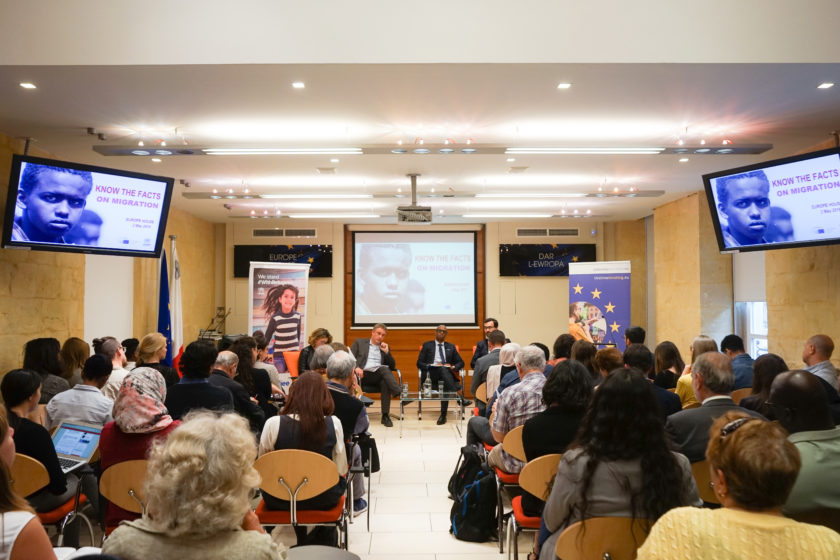 Studies show the Maltese top Europe for seeing migration as both a problem but also as a necessity, acting Head of the European Parliament Office in Malta has said.

Ms Anna Zammit Vella told a joint UNHCR and EP Office event at Europe House in Valletta that it was interesting that in a recent survey carried out by the Eurobarometer, migration was the main concern for Maltese respondents in the run up to the European Elections. However, this concern was not shared with the Maltese or wider European community taking part in the ‘This Time I’m Voting’ campaign.

She added that migration was being outweighed by greater discussions about climate change.

In the recent poll carried out by the Eurobarometer, immigration was considered a key priority for discussion in the European elections, Maltese respondents said.

According to data gathered on Maltese public opinion, 72% of people said Immigration should be discussed more readily during the electoral campaigns.

This was higher than the EU average of 44% of respondents across the 27 EU member states.

Migration down means EU population could be halved in 50 years

Dr Derek Lutterbeck explained that while it appeared positive that migration was becoming less of a concern for EU citizens, the decline must be coming at a cost now and for the future.

The keynote speaker for the event explained that, ‘While numbers of migrants have decreased, numbers of deaths have increased, journeys have become more dangerous and rescue operations more difficult, not to mention the number of migrants stuck in Libya.’

Dr Lutterbeck also pointed out that there is a drop in immigration there would be a serious risk of the European population halving in the next five decades.  This would mean serious knock on risks for social security and pensions. He ultimately called for a ‘more open and rational attitude’ towards migration and population decline.

A key part of the UNHCR and EASO event was the launch of a document focused on diseminating the facts about migration and dispelling the myths and misconceptions.

In presenting the ‘Know Your Facts’ publication, Malta Representative of UNCHR Kahin Ismail explained that the problem of migration was largely politicized in the EU, with ‘the real crisis became a crisis of response.’

For this reason, the publication focused on 7 key areas that were the responsibility of the people as well as politicians to address.

‘The object of the booklet is also to contribute to a constructive discussion and debate in terms of protection and integration,’ Mr Ismail explained.

This document is also understood to have been delivered to the candidates running for the European elections this month.

Adding to the conversation, the interim Executive Director of EASO Jamil Addou, highlighted the importance of living up to obligations to asylum.

Addou explained that it ‘is an obligation under international and EU law, not an option. Hence, EASO stresses the importance of having fair and protective procedures in place but also procedures that are safeguard against abuses. Applications for asylum should be treated in the same way and should have the same outcome across the EU.’

The full ‘Know Your Facts’ document can be accessed here