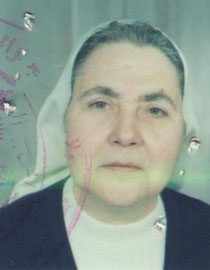 19 Algerian martyrs were beatified in a ceremony yesterday, with Sister Jeanne Littlejohn of Maltese descent among them.

In a letter send on the occasion, Pope Francis said that martyrdom and persecution are not things of the past, and we are still suffering from them today, both when it comes to bloodshed as is the case with most contemporary martyrs, or else more subtly, through lies and defamation.

The ceremony started on the feast of the Immaculate Conception, in the Notre Dame de Santa Cruz Sanctuary in Oran, Algeria. It was presided by Cardinal Angelo Becciu, Prefect of the Congregation for the Causes of Saints which the Pope delegated to him to lead in his stead.

Sr Jeanne Littlejohn was born on 22 November 1933 in Tunis, Tunisia. She was French, but her mother was Maltese. The Sister joined the Missionary Sisters of Our Lady of the Apostles and took her vows on 8 September 1959, and took the name Sister Angèle-Marie. She was killed by Islamic forces.

Dominican Bishop Pierre Claverie of Oran and 18 religious men and women from France, Spain, Tunisia and Belgium were killed in the predominantly Muslim nation between 1991 and 2002 under various circumstances during the conflict between the Islamists and the military.  Among them are 7 Trappist monks of Tibhirine murdered in 1996. Six of the 19 are religious women.

In his letter, the Pope said that Jesus, the Son of God who was without fault suffered persecution and a cruel death on the cross, but had told his disciples: “A servant is no greater than his master. If they have persecuted me, they will also persecute you”.

The Holy Father said that the Church has always had a special devotion to the martyrs who witnessed to their faith and love for Jesus, even to the shedding of blood, trusting in the words of the Lord: “I have been given every power in heaven and on earth…  Behold, I am with you every day, until the end of the world.”

The Pope concluded his letter saying these martyrs have forgiven their killers, showing that they love eternal life more, and now “they possess what they loved, and they will possess it even more fully at the resurrection of the dead”.

Martyrdom is the air that Christians breathe

Watch: Mass commemorating the life and work of Adelaide Cini