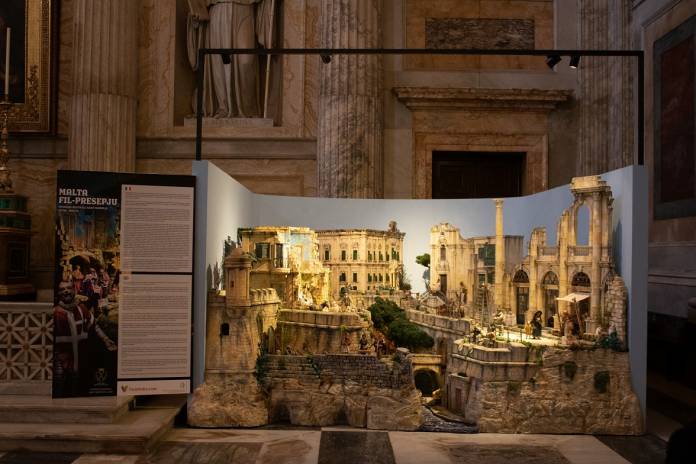 An original work by volunteer artists from the St Andrew’s Band Club of Luqa, Adrian Gatt and Ray Zammit, the crib titled Malta fil-Presepju was officially inaugurated in the Papal Basilica of St Paul-Outside-the-Walls in Rome on Saturday 7th December by Malta’s Ambassador to the Holy See Frank Zammit, Minister for Foreign Affairs and Trade Promotion Carmelo Abela and the President of the band club Charles Attard.

Present for the ceremony were, among others, Cardinal James Michael Harvey and Fr Roberto Dotta, Archpriest and Abbot of the Papal Basilica respectively, as well as the artists, members of the band, and their families and friends.

The crib was built in 2017 and this is the third time that it is being exhibited for the public. Originally, it was on display at the Club’s premises, while in 2018 it was exhibited at the foyer of the Maltese Parliament.

The setting of the scene is Malta’s capital, Valletta, with miniature replicas of various prominent buildings within the city including the Auberge de Castille, the church of Our Lady of Victory, the remains of the Royal Opera House, as well as a few traditional Maltese houses, with one of them, partly demolished in the World War II bombardments, providing the birthplace of baby Jesus. The whole setting is surrounded by Valletta’s bastions and the sea. The crib also reproduces the painting by Maltese artist Giuseppe Cali, as found in the Nativity altar at the Luqa Parish Church. The figures are wearing traditional Maltese costumes and include St Ġorġ Preca surrounded by children, a lamp lighter, a milk seller with his goat, shepherds with their herds, women wearing the traditional Maltese headdress (għonnella), a fruit and vegetable vendor, a horse-driven cart, and musicians playing traditional Maltese instruments.

The figure of Jean de Valette, Grandmaster of the Order of St John, who gave Valletta its name, welcomes all those who visit this crib. Also represented is Pope Pius V, Head of the Catholic Church and ruler of the Papal States from 1566 to his death in 1572. Pope Pius V, who contributed towards the building of Valletta, is represented together with Italian architect and military engineer Francesco Laparelli da Cortona, an assistant of Michelangelo, who was sent by the Pope to supervise the construction of Valletta.

Minister Abela described the exhibition of the crib as an excellent example of cultural diplomacy.

The exhibition is being jointly financed by the Ministry for Foreign Affairs and Trade Promotion – through its Cultural Diplomacy Fund – and the Ministry for Tourism, and will remain open until the 7th of January 2020.

Watch: ‘Coronavirus case will not have any affect on MDH operations’ – CEO

Reuters   July 10, 2020
Sehovic, in her early 40s, launched her memorial exhibit in Bosnia's capital Sarajevo in 2006 with a donation of 923 cups from Srebrenica women who lost loved ones in the massacre.

‘Be the Artist’ winners announced

Staff Reporter   July 9, 2020
The selected artistic submissions will be exhibited at MUŻA, the National Community Art Museum, and will also be shown on Heritage Malta’s website and Facebook page.

Reuters   July 10, 2020
"Around the world the pandemic is in its most acute phase. We cannot waste the sacrifices the Italians have made in recent months," Speranza said.