After the Parliament Magazine chose MEP Alex Agius Saliba as one of ten key-players from 705 MEPs, in the digital arena, Politico has also highlighted 11 important policies on the EU’s fall agenda.

One of these policies is to regulate platforms such as Google, Facebook, Apple and Amazon via the Digital Services Act, a legislative package expected by the end of the year.

Last week the Maltese European Member of Parlaiment Alex Agius Saliba was chosen by the Parliament Magazine, as one of ten key-player from 705 MEPs, in his capacity as IMCO rapporteur on the report Digital Services Act: Improving the functioning of the Single Market. 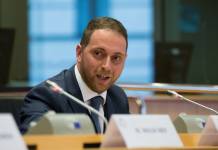 Agius Saliba said in a statement that the Digital Services Act aims to strengthen the single market for digital services and to regulate the online ecosystem through a series of measures spanning online safety, liability, market dominance, online advertising and smart contracts as well as issues surrounding self-employment online.

The Labour MEP continued to explain that the COVID-19 pandemic had exposed serious shortcomings in the way platforms such as Google and Facebook are regulated in Europe, considering that the main principles of the current E-Commerce Directive, such as the internal market clause, freedom of establishment and the prohibition on imposing a general monitoring obligation, should be maintained.