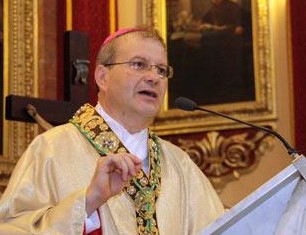 Bishop George Bugeja Co-Adjutor bishop of Tripoli said that the media reports that he had been evacuated from Libya were unfounded as he had not asked to be evacuated from this war-torn country. He said that it was indeed true that he had a flight ticket which was scheduled for 30 August. He had planned to be in Malta for Xagħra’s village feast dedicated to the Nativity of Mary

In a Facebook post, the Bishop said that despite the situation in Libya had worsened over the past few days, he chose to remain in Tripoli until the Mitaga International Airport was reopened again. Due to the outbreak of hostilities the airport was closed and will only be reopened when there is a security clearance.

He also said that he declined to fly to Malta from Misurata despite having the option to leave Tripoli. Bishop Bugeja said that he would not have left Tripoli had it not been for his busy schedule. Mgr George Bugeja, a Capuchin friar,  was ordained Bishop in 2015.

Giving my life for the people – Archbishop Scicluna