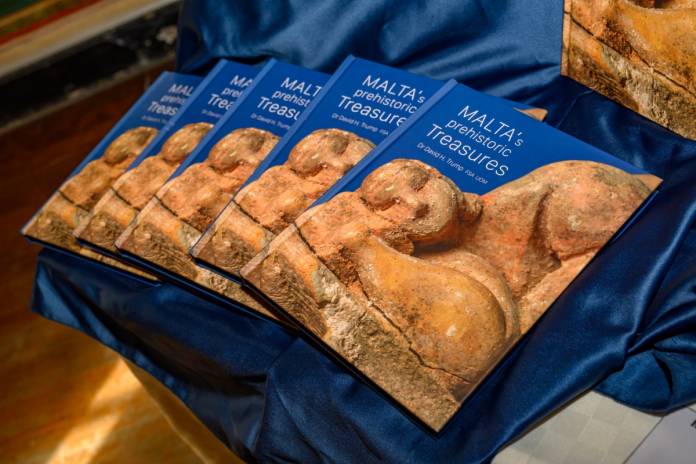 Since the prehistoric period does not provide any written evidence, one can only hypothesize how people lived during this time. However, one can gaze through the thick folds of human existence by means of the artefacts which were unearthed during archaeological excavations, and with the additional help of scientific analyses.

Heritage Malta’s latest publication ‘Malta’s Prehistoric Treasures’ is an intriguing book which focuses on a collection of 50 artefacts that were chosen from the National Collection by the renowned late archaeologist Dr David Trump. Through these artefacts he intended to accompany the readers along a personal journey in Maltese prehistory which fascinated him so much. Therefore this book has an increasing significance since the selected artefacts are not only allowing the readers to learn about the prehistoric people but also to see through the eyes of a very inspirational archaeologist.

Among the curious narratives, one finds a female figure which was discovered at the Tarxien Temples. The figure is modelled in clay but positively gross compared to other finely figurines carved in stone. She is heavily pregnant, with one hand to her pubis and the other to her head. What marks her out particularly is the fact that, before it was baked, the clay was pierced in 16 places with sharp fragments of shell, suggesting some form of witchcraft practiced for hurting an opponent by magical means.

In a captivating introduction of the book, Dr. Trump ponders on what makes an object a ‘treasure’? Although to most people, the value of an object is in its cash value, he reveals that for archaeologists, the value lies in their ability to tell a story. Indeed all the artefacts being presented in this engaging book have a very interesting story to tell.

Another compelling item is the repaired clay jar which was unearthed in Skorba Temples. Evidently, the neck of the jar had begun to crack away from the body but instead of throwing it away and replacing it, someone drilled pairs of holes above and below the crack in order to tie the two parts together with a long string to continue to use it. Certainly, such a personal touch which have survived across thousands of years is genuinely precious.

As Sharon Sultana, Senior Curator of the National Museum of Archaeology, pointed out in the preamble of this book, “the readers are in for a ‘Grand Tour’ of this prolific period.”

Photography and design of ‘Malta’s Prehistoric Treasures’ is by Daniel Cilia.

First replica of Napoleon’s letter presented to the President, others issued for sale