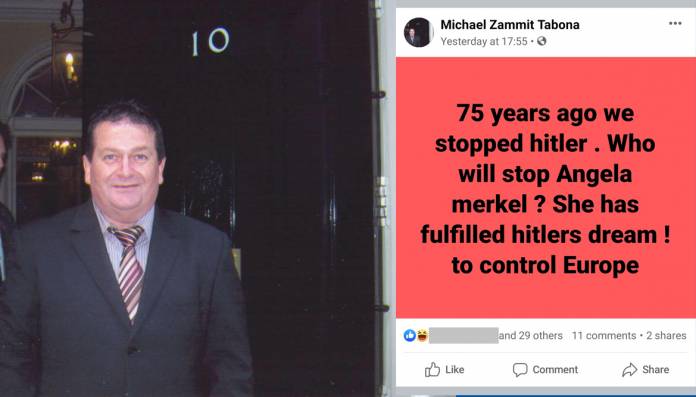 The Maltese Ambassador to Finland Michael Zammit Tabona has resigned after he compared German Chancellor Angela Merkel to the Nazi dictator Adolf Hitler in a Facebook post.

Foreign Minister Evarist Bartolo was quoted saying that Zammit Tabona had stepped down for his post and Malta is expected to apologise to Germany over the comments made. Speaking to Newsbook.com.mt, Bartolo did not confirm whether Zammit Tabona stepped down or was made to resign.

Speaking to the Times of Malta, Bartolo said that Zammit Tabona was asked to take down the post as soon as he was made aware of the post.

In a blog published on Newsbook.com.mt, independent candidate Arnold Cassola pointed out that Zammit Tabona is a Partit Laburista donor.

Cassola on Saturday said “You might not agree with Merkel’s politics, but comparing her to Hitler is a bit rich. Not even the pirate Captain Morgan would act this way,” Cassola said, in reference to the government’s chartering of Captain Morgan tourist boats to host migrants rescued at sea. Captain Morgan is owned by the Zammit Tabona family.

Partit Nazzjonalista condemned the behaviour saying that it was “most incorrect”. The Opposition said that it was undignified and far from the way a diplomat representing Malta should act.

Describing the statements as “not becoming of an ambassador”, Partit Nazzjonalista said that Zammit Tabona was installed into the post of an ambassador and chosen from outside the diplomatic corps.

The Malta Chamber of Commerce, Enterprise and Industry welcomed the resignation of Michael Zammit Tabona from Ambassador of Finland, following his comments on social media.

“Good governance demands high ethical, professional and diplomatic standards from our Ambassadors. The country ought to have representatives of the highest credibility that attract strong trust levels in the interest of Malta” – stated The Malta Chamber of Commerce, Enterprise and Industry.

John Paul Cordina   August 2, 2020
Government-owned airline Malta MedAir has performed its first scheduled flight with its own aircraft this weekend, amid plans to expand its operations.

Amy Borg   August 4, 2020
Government Assistance also featured highly, as a requirement seen to be a central motor for growth and investment. Sustainability remained a key topic which cut across all sectors, as it underscored importance to start thinking more long term than we are actually doing till today.