The national team has won its second game in a row in its UEFA Nations League group. 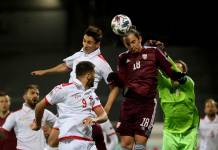 Malta is currently in the second place, two points below the Faroe Islands.

Initially, Andorra’s Marc Rebes scored in third minute, however, Malta made a come back in the second half after Emili Garcia scored an own-goal at the 56th minute followed by a goal scored by Jurgen Degabriele two minutes later. The third goal was scored by Shaun Dimech.

What do you think of Malta’s performance?

Leave your comments below or email us on: info@newsbook.com.mt