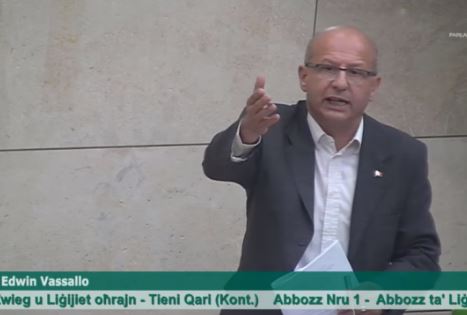 Malta should reinvent itself and stop relying on population growth and excessive construction to achieve prosperity at the expense of its environment, Nationalist MP Edwin Vassallo said this evening.

Vassallo was speaking during parliamentary debate on a bill which would allow the Environment and Planning Review Tribunal to function through electronic and other means in exceptional circumstances, including the ongoing coronavirus pandemic. The bill reflects present practice at the EPRT, introduced through legal notices.

The MP argued that while the pandemic was a cause for hardship, it provided Malta with an opportunity to change its course, urging the government to seize this chance.

“With an economic model based solely on population growth and construction, we are destroying our own country in the name of wealth,” he said, insisting that there were other paths to prosperity that Malta could follow.

Malta, the MP said, had reached a point where it had to struggle to safeguard every tree, every valley and every bit of rural land.

Quality of life was declining, Vassallo said, stating that by ruining its own environment, Malta was not only destroying the reason tourists were attracted to the country, but was also leading an increasing number of Maltese to believe that their future lay elsewhere.

In his address, the MP also argued that it was ironic to see Malta spend so much to limit the spread of coronavirus whilst doing little to address the many premature deaths brought about by air pollution. He cited a study which estimated that on average around 576 people died prematurely from illness brought about by airborne pollutants in Malta each year.

He said that it was disappointing to see MPs disagree on safeguarding the environment, before criticising the EPRT for decisions which favoured the powerful at the expense of the weak. Though the opposition was set to approve the bill, Vassallo warned that by allowing the tribunal to continue to function through electronic means, this imbalance of power could be further perpetuated.