Malta needed to intensify its efforts against the racism and work to ensure that anti-racist education takes place at all levels of education in Maltese society, according to the Dean of the Faculty of Education within the University of Malta.

“As members of the Faculty of Education, University of Malta, we have observed recent events marking the fall-out from the callous murder by insensitive members of the US repressive state apparatus after having been filled with revulsion and indignation at news of the act,” Colin Calleja said.

He said that the fallout from the event – “the latest in a series of acts of violence against African-Americans,” was an opportunity to reflect on racism throughout the world and within Malta’s own borders.

Calleja highlighted that Malta was not immune to overt and symbolic violence on the basis of race, culminating in the wanton killing of Lassana Cissé, allegedly by members of the Armed Forces of Malta. 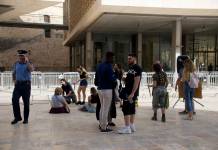 “The very same people who are meant to protect human beings from incidents of racism were, hardly over one year ago, the alleged perpetrators of this very same racist act in its murderous form,” he observed.

The dean highlighted that the faculty had long attracted criticism for teaching anti-racist education since the start of the new millennium, with some of its members taken to task in the media for “inventing an issue that does not exist.”

“Others have been victims of right-wing attacks, on web pages and other places, for their pedagogical and social stances on the issue,” Calleja said.

Though he said that the Faculty sought to prepare its students in an anti-racist, multicultural, multi-faith based education, it was aware this was not enough.

“We need to intensify our efforts against the racist scourge and drive home the point that anti-racist education should be a feature of all levels of education in Maltese society from schools to adult and higher education and across all sectors of the country, including prisons, law courts, the health sector, transport services, housing services, employment agencies, continuing professional development programmes, journalism (print, broadcast and online), advertising and so forth,” Calleja said.

The dean said that people in the Faculty who specialised in this issue were ready to work with all those interested in contributing to such efforts.

“We realise that, although it does and cannot change things on its own, education can still make a positive and crucial contribution to a broad effort in tackling racism head on. All lives matter and ought to be dignified, irrespective of colour,” he concluded.

Watch: Local personalities speak out against racism in powerful video