Malta is one of 7 member states who have seen a decrease in voting turnout in this election for the European Parliament. Malta’s decrease was of 2.2%, which was middle of the range between Cyprus which saw a decrease of 1.2% and Bulgaria which registered a 4.4% decrease in voter turnout. The other 20 member states all registered an increase and one member state, Belgium, retained a static voting turnout. The range of increase in turnout varied from the marginal to the pronounced. Italy fell in the marginal group with a 0.8% increase in turnout. From a voting turn out of 57.2% in 2014 to a 58% in 2019, the voting turn out increased very little. Spain’s turnout, on the other hand increased considerably. From 43.8% in 2014 it increased to 64.3% in this election, the increase was over 20%, the highest since 1987. 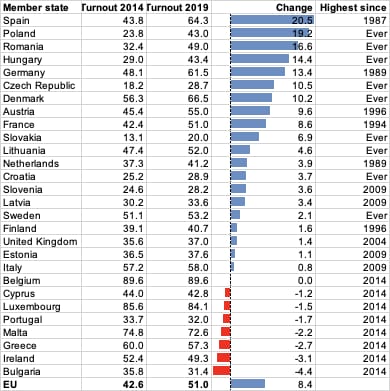 Nine countries saw the highest voter turnout ever: Sweden, Croatia, Lithuania, Slovakia, Denmark, Czech Republic, Hungary, Romania and Poland. Malta ranks third highest in voter turnout with 72.6%, preceded by Belgium at 89.6% and Luxembourg at 84.1%. The push made by the European Parliament for increased participation in these elections seems to have worked since the EU average increased from 42.6% in 2014 to 51% participation in 2019.

Monique Agius   August 14, 2020
Among the restrictive measures, the regions have also banned smoking in outdoor areas when keeping a safe distance is impossible. The measures are aimed at curbing a rise in the coronavirus infections.