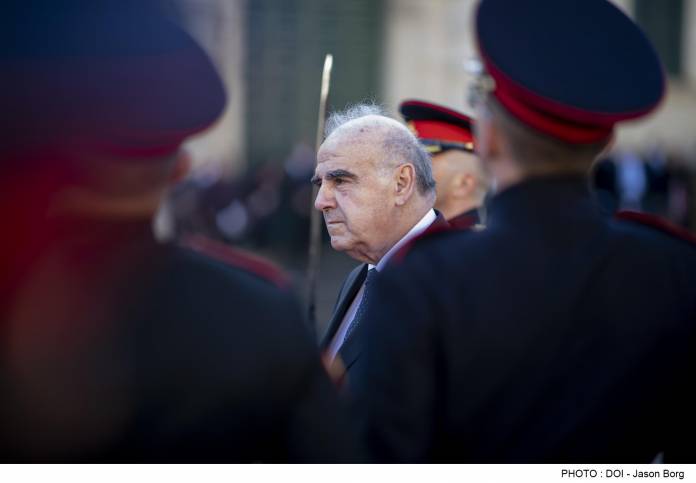 “Let us remember that the Republic of Malta is far bigger than the gang of people who brought shame on our country. Let us defend our country’s name, especially with those who could use this turn of events to harm and belittle Malta’s image abroad.”

He described the assassination of journalist Daphne Caruana Galizia as a horrendous act. Besides appealing for calm and unity he also stressed the need that justice must be done.

President George Vella was addressing the audience gathered in the Presidential Palace to celebrate the 45th  anniversary of the setting of the Republic of Malta.

Maltese society shocked to the core

He acknowledged that Malta is going through circumstances that shocked it to its core, that shocked our institutions from their foundations and that stained Malta’s name internationally.

He said that with a heavy heart he notes that these circumstances have a very negative effect on our credibility, our commercial activity, investment, tourism and the good name that Malta has always carried in international spheres.

Desolation and even a degree of anger were the two emotions mentioned by the President and which people feel towards the individuals who brought us to where we are today. He said that these are unprecedented events that cast a heavy shadow of doubt over the functioning of our institutions and their impartiality.

I did all I could

He noted both that his silence was considered as a weakness and that others who wanted him to speak, and say, more. He assured everyone that he has fulfilled his duties “together with the authority given to me by the Office of President, in silence, utmost confidentiality and prudence.”

The President said that he has kept himself informed of developments, minute by minute, and discussed facts and opinions with whoever is Constitutionally bound to keep me updated with events. He listened, assessed and gave the advice he thought best and took a step back from making public pronouncements.

The decisions I took were based on information provided by those obliged to do so while he also consulted those whose professionalism, integrity and moral fibre he trusts.

Justice must be done

The President stressed both the need to stand united, as Maltese and Gozitans of goodwill but also to expect that justice is done without hatred.

“Those who brought us to this juncture – whoever they are – were not working in the interest of the People of Malta. What happened cannot, ever, be justified.  We need to be united in the hope that all those who have to shoulder the responsibility for their behaviour, do exactly that, and pay the consequences. Whoever this maybe.”

He said that “investigative and judicial authorities have to be allowed to do their work without interference, with serenity and with the due respect for their integrity, competence and independence.”

Appeal to the Maltese people

President Vella said that like the Maltese he is saddened, hurt, shocked and shares the anxiety and uncertainty shown in the family, at work, among friends.

After saying that Malta is far bigger than the gang of people who brought shame on our country he appealed to all to defend Malta’s name “especially with those who could use this turn of events to harm and belittle Malta’s image abroad.”

Noting that the people have been severely damaged by all this he continued that people should keep their heads held high to continue “our journey, locally and internationally, to improve the conditions of work, the quality of life and above all strengthen the solidarity that has always united our People.”

The assassination was a horrendous act

He described the assassination of journalist Mrs Caruana Galizia as a horrendous act.

“Together we need to solemnly vow that all measures will be taken for anything similar never to happen again.  On this occasion, we come together in voicing our profound regret at what has happened.”

Vella while calling for the implementation of all legislative and security measures to safeguard the rights of the press and media in Malta, he called upon journalists “to be conscious of the critical responsibility they carry in modern society.”

He called on the public in general to make better use of social media, “which I am sorry to say, through disrespectful language and malicious messages, have turned it into an infinite source of hate.”

Appeal to Members of Parliament

He reminded members of Parliament of their duty to guard the fundamental freedoms of the citizens, to ensure that prosperity is fairly distributed and to legislate for the strengthening of our institutions, for the judiciary’s guaranteed independence and for them to work without any interference to be able to fulfil their duties with impartiality and justice.

He pleaded for a more decorous tone and content in Parliamentary exchanges.

“Let us hold our discussions respectfully – on a reciprocal basis – and on well-prepared content. Let us give back to the House of Representatives the respect it should command.”

Vella said that those in charge of our institutions should ensure the rule of law and democracy as without them order and justice simply break down.

It is important, said the President that those leading these institutions are not hampered in the execution of their duties and that no leniencies or any other undue considerations prevail in the delivery of their duties.

Saying sorry is not enough

He said that to “just say we are sorry for what happened, is definitely not enough” as we also have to ensure that justice is done and that it is seen to be done.

Vella thanked all those countries that helped and are helping with the investigations of the assassination of MDaphne Caruana Galizia.

“The whole of Malta should not be tarnished by these sad events.  Malta is far bigger than any group of individuals involved in these events – whoever they may be. Our country’s role in the creation of all that is good and beneficial to its people, both domestically and internationally should not be obscured by what has very regrettably happened.”

Not an easy hour

The President said that this is not an easy hour but one we have to live through till we discover and out the whole truth to ensure that all those involved, “high and low, have to carry the burden of their responsibility and pay their dues”.

The people, he said, have a right to express themselves in all the freedom guaranteed to them by the Constitution adding that the more civil these manifestations are, the more effective they will be.

Together, he said, we need to mend what has been broken and reconstruct what has collapsed.

“We need to build our country anew”, said Vella.

We need, he said, to ascertain that our country’s institutions are not threatened in their word and that those who “in one way or the other carry some form of political, institutional or Constitutional responsibilities to carefully weigh their actions, and act once they are sure to place the national interest before the personal one”.

Saying that Malta’s strength always rested in unity he appealed to the Maltese to “appreciate, and stand proud of, our good qualities as a nation. Let us strive for more unity and put aside what divides us. Let us build on the good we already have and on all that is positive.”

“I am convinced we will make it” was the parting shot of the President.

Monique Agius   January 28, 2020
Speaking about the carnival float which linked the Archbishop to child abuse, Archbishop Scicluna said that he was not against satire targeting those in public life especially during carnival. He explained that however, satire stops being satire when one's aim becomes a targeted smear campaign.

Nigeria is under siege

Mario Schiavone   January 28, 2020
Mgr. Matthew Man-oso Ndagoso, Archbishop of Kaduna, Nigeria, the archdiocese where on the evening of January 8 four seminarians were kidnapped in the” Good...

Coryse Borg   January 27, 2020
Singer/songwriter Billie Eilish, who turned 18 in December 2019, won all four major categories. She is is the youngest artiste to win Album of the Year, for 'When We All Fall Asleep, Where Do We Go?'.

Watch: I’ll wait for legal advice before deciding on Mizzi –...