A Sicilian town is reporting a new cluster of Covid-19 cases; and a group of young friends who went on holiday in Malta appear to blame.

The group of 13 hail from Canicattini Bagni, a town in the province of Syracuse in the southeast of Sicily. They had travelled to Malta on 2 August, and returned to Sicily four days later, and since then, 11 of them have tested positive for Covid-19.

The mayor of Canicattini Bagni, Marilena Miceli, criticised Malta’s handling of the pandemic as she noticed how there was little to indicate any precautions were being taken in Paceville.

“They were on holiday, met locals, went to discos,” Miceli said. “When I see all the pictures that end up on social media, I am not convinced that there are many controls in place in Malta.”

Malta remains a popular destination for young Italians – particularly young Sicilians looking for a cheap holiday. But it appears that the cluster linked to Paceville is raising concerns.

In its report, La Repubblica observed that it appeared to be no accident that there have been a number of cases in Italy linked to Malta in recent days. It highlighted that the prevalence of Covid-19 in Malta is currently the fourth highest in Europe. 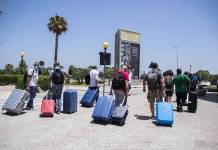