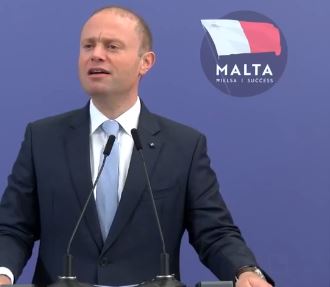 Prime Minister and Partit Laburista leader Joseph Muscat said that Malta will stay riding high on the current wave of success if we become more open to foreigners instead of staying wrapped in nostalgia and conquered by fear.

During a political activity in Mellieħa, Muscat said that the crux of the matter is to find grounds for universal wellbeing. He also added that as a matter of principle, those who loudly voice their opinion against abortion should not deflect from their philosophy when migrants need to disembark in Malta.

The Prime Minister also said the decision to allow the disembarkation of the 64 migrants from on board the Alan Kurdi was taken because the Government values life and well as safeguard Malta’s reputation. However, he added that the Government also wanted to make sure that this does not get interpreted as Malta opening its ports for the approaching summer season, and that is why no migrant from the Alan Kurdi will stay in Malta but be transferred to other states within the European Union.

Joseph Muscat further added that the Government is looking ahead, flying high on the current wind of change and reform and explained how this week; it has initiated discussions in Parliament on cremation, a topic which was considered taboo up to a while ago.

The Prime Minister also made it known that the Partit Laburista will be embarking on a 25-day mission to ensure that a reformist party stays at the helm of the Maltese government.