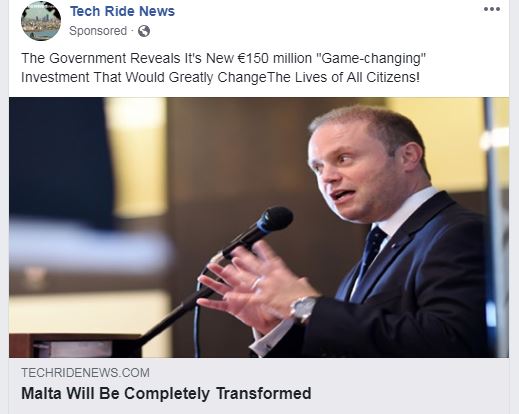 A Facebook page targeting Maltese audiences is sponsoring ads on Facebook with claims that the Finance Ministry has invested some $500 million in a deal with the The Bitcoin Revolution.

The ads, when accessed, do not correspond to what one finds upon clicking on the link. The Facebook page was created on 4 December.

Tech Ride News, is running three sponsored posts captioned ‘The Government reveals it’s new €150 million “Game-changing” Investment that would greatly change the lives of all citizens!’ The images carried on the embedded link show Prime Minister Joseph Muscat on two of them and Minister Konrad Mizzi at the counting hall on the third one. The adverts were made to target Maltese audiences.

When one clicks on the link, a site opens, which to the untrained eye might appear as though it is the technical section of the news giant CNN, CNNtech, however on a closer look the URL shows that it belongs to www.techridenews.com. The article’s headline does not correspond to the one which appears on Facebook, instead it reads Malta’s Ministry of Finance Announces Acquisition of a $500 Million Startup, saying “This Is Where the Future Lies”. Contrary to what one would expect, the image accompanying the text shows Prime Minister Muscat and not the Finance Minister Edward Scicluna or even, the image as on Facebook showing Minister Konrad Mizzi.

The whole scheme aims at selling a crypto currency called Bitcoin Revolution, which one can access at the bottom of the page if you access the page via the Facebook ad. According to the article, the Finance Ministry has invested some $500 million deal with the The Bitcoin Revolution.

However to one’s surprise, if you had to go to Google, and type in the URL, the page is completely different from the one you’re redirected to from Facebook. CNN tech logo does not appear as it can be seen from the screenshot below, and the article corresponds to at least one of the sponsored ads doing rounds on Facebook.

It was only last week, that Facebook newsfeeds of Maltese users have seen sponsored adverts from another fake-news website called organicdecors.com carrying an image of the Prime Minister Joseph Muscat and appearing to announce “Malta’s biggest investment to date”.

Another, similar scam page which had appeared was Stockschemes.com.