The Institute of Maltese Journalists (IĠM) regrets that Malta has again fallen in Reporters Without Borders’ Press Freedom Index. Malta is now 31 places lower than it was in 2016.

“No society can be truly free and democratic, if it is not well-informed, and in this respect, this latest drop is worrying as much as it is disappointing” – said the IĠM

In its reaction published on Wednesday, the IĠM agreed that weaknesses in the rule of law ultimately hinder journalism and that much more needs to be done to allow journalists to have access to important information. 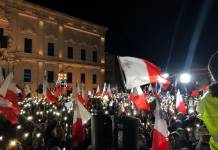 In its entry on Malta the RSF press freedom index points to the events which happened in December last year when people took the streets and ultimately forced the country’s Prime Minister out of office.

The IĠM stated that the country’s independent media were the only reason the information ultimately came to light.

The IĠM said that from the public inquiry into the murder of Daphne Caruana Galizia, we saw the failure of authorities to act on reports of corruption and in addition allowing bad actors to act with impunity leaving journalists alone and at risk.

Ridiculing and attempting to discredit journalists, results in a more dangerous situation, said the institute.

The institute also pointed out that although in Malta political parties own their media organisations it takes nothing away from the work done by the country’s independent media houses.

IĠM said it hopes to work closely with the government and Malta’s political parties to address a number of the issues raised in the latest press freedom index, including the problem of hate speech towards journalists.

The IĠM took the press freedom index also in the perspective of the current crisis experienced due to COVID-19 pandemic and mentioned the World Press Freedom Index which notes that “the coming decade will be decisive for the future of journalism highlighting and amplifying the many crises that threaten the right to freely reported, independent, diverse and reliable information”.

While noting that the Government reacted to its calls for immediate action on safeguarding the journalistic sector during this pandemic, more clarity on the government’s commitment in helping the local newsrooms is being demanded by the Institute of Maltese Journalists.