The Maltese Prime Minister Joseph Muscat, has told delegates at the United Nations General Debate in New York, that Malta has, ‘embarked on a journey of conviction to fight social marginalisation.’

Muscat added that this has included addressing the, ‘needs and rights of those who for decades were considered as daughters and sons of a lesser God.’

This was part of the Prime Minister’s speech to the General Assembly yesterday, in which he outlined how Malta ‘advancements’ in regards to LGBTIQ rights, equality and diversity in society. 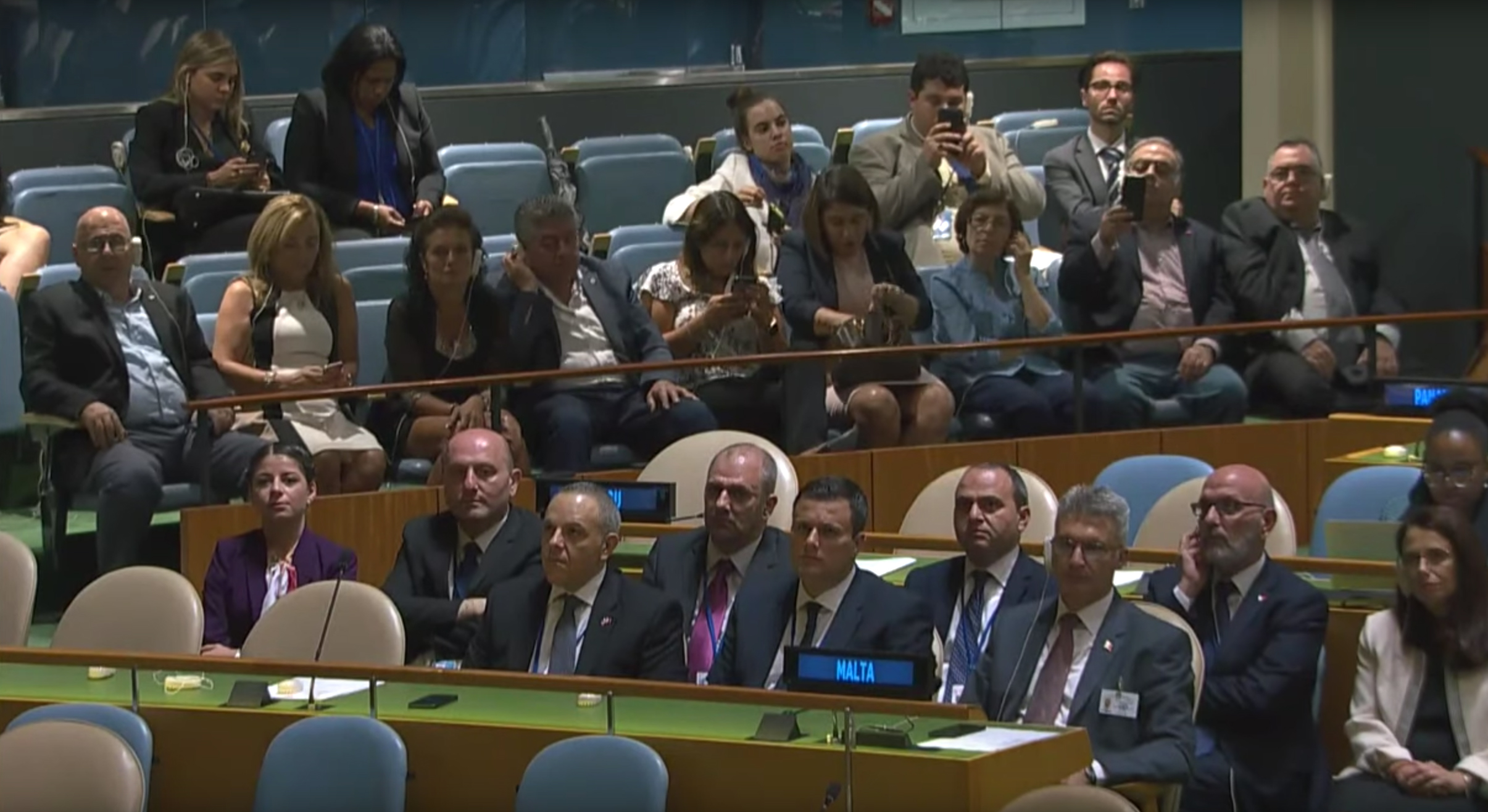 The Prime Minister explained that the Office of the High Commissioner for Human Rights had said that Malta’s efforts for the LGBTIQ community were considered the ‘global “gold standard”.’

He added that there had been a number of acknowledgements of Malta efforts in this regard. The ILGA Rainbow map ranked Malta 94% in the world for LGBTIQ protections of ‘equality and non-discrimination, hate crime and hate speech, legal gender recognition and bodily integrity, civil society space and asylum.’ The Rainbow Map actually places Malta with a 90% overall ranking. 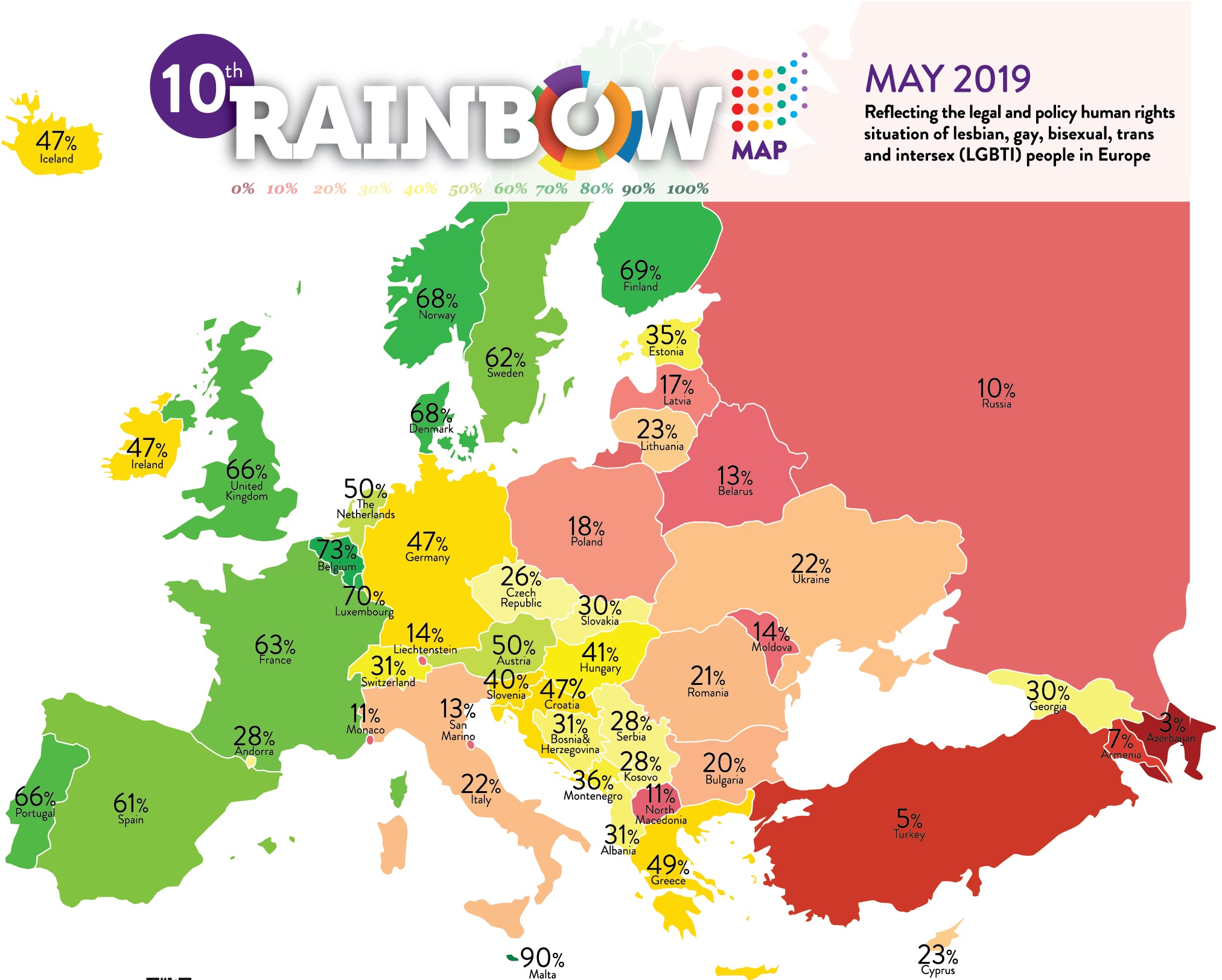 Public outcry over LGBTIQ inclusion sticker for restaurants and businesses

Why Pride March?‘We need an EU-wide policy to protect the LGBTI+ community’

‘When I think about the future, my mind instantly goes to my daughters’

Alongside discussing the social improvements in Malta, the Prime Minister also discussed how the Maltese government was implementing the UN Convention on the Rights of the Child.

Dr Muscat stressed that the country placed health and inclusive education as ‘fundamental human rights’ that are ‘indispensable for the achievement of sustainable development and the realisation of the Sustainable Development Goals.’

‘In this vein, all children, boys and girls, should have access to good quality health and education to ensure their wellbeing. Our objective is to equip all children with the appropriate environment and tools that allow for the acquisition by all, of the necessary skills and talents for citizenship and employability, in the 21st century and beyond,’ the Prime Minister added.

What did not appear on the Prime Minister’s call to action was the country’s actions towards investigating the murder of Maltese journalist Daphne Caruana Galizia, improving press freedom in Malta and allegations of corruption and the divisiveness of Maltese politics.

‘We can describe today’s world in many ways: interdependent, aware, diverse. Yet it is also polluted, isolationist, unequal. We have never been so closer together, yet further apart.

We are living in an era where whilst the individual is at the centre of the decision-making process, the decisions that are being taken are not necessarily people oriented. Contradictory situations and outcomes are the order of the day.

We cannot just accept all this as inevitable. We are fortunate enough to be living in an age when we are not only aware of changes that are happening around us, but we are also part of them. We are duty bound to ensure that these ongoing changes and transformations leave no one behind.

Transformations need to be used to benefit our people and not create divisions between the haves and the have nots; those on the outside with those on the inside. Because economic prosperity does not mean social injustice, and patriotism does not equate to isolationism.

The future should be equal. It is our responsibility to show the value of all peoples, irrespective of their age, race, sexual orientation, gender, creed or disability. Diversity is an enriching factor of society.

Firm in this belief, Malta has embarked on a journey of conviction to fight social marginalisation and address the needs and rights of those who for decades as daughters and sons of a lesser God.

From marriage equality to gender neutral markers, the advancements made by Malta in the field of the LGBTIQ community are described to be the global “gold standard” by the Office of the High Commissioner for Human Rights. It is a privilege and a responsibility to be seen as a leader on such an important matter.

With an overall rating of 94% in the ILGA Rainbow map, Malta is now consistently the leading European country in protecting LGBTIQ people in areas of equality and non-discrimination, hate crime and hate speech, legal gender recognition and bodily integrity, civil society space and asylum.

All this was achieved in just a few years thanks to a strong bond between the Government and civil society. Our experience has taught us that empowering citizens and ensuring that they have a voice in addressing and resolving issues that concern them and impact on their lives, is an important part of Malta’s success in this field.

And yet in spite of our successes, there is still a long way to go.

Our ambition is clear; not only to provide the necessary legal platform but to contest social norms that abet stigma and discrimination. Legislation alone does not guarantee societal change. We are working strong and fast on this aspect and our efforts are starting to bear fruit.

The latest Eurobarometer survey on LGBTIQ equality ranked Malta first in acceptance of gender identity recognition. It also showed positive results in societal acceptance of LGBTIQ colleagues and the need for inclusive educational curricula in schools. On the other hand, we note that we need to continue to address certain issues to ensure a more holistic approach such as family acceptance.

Autonomy and empowerment are values that our legislation and practice seek to mainstream, while ensuring appropriate supports to persons who could find themselves in more vulnerable situations.

This is why we have also enacted cutting-edge legislation in the field of gender identity, gender expression and sex characteristics, and why we are currently working, further to UN recommendations on other areas.

The future is female, for we need to understand that we cannot succeed when approximately half of our global population is being held back.

Women have for centuries played an important role in society both in communities and for the past decades in places of work. Yet this role has been underestimated, under-acknowledged and at times even unrecognized.

I firmly believe that the strong worldwide momentum pushing for women’s rights should inspire leaders to review the pace of progress and ensure that Governments commit to achieving gender equality in our lifetime. On a national level, Malta has been promoting numerous initiatives  which underscore the country’s commitment to the gender equality agenda and the promotion of equal opportunities for all.

We replaced our passive benefit system, with its underlying poverty trap, into an active system that puts people back onto their feet. We were not willing to continue to accept a situation where we allowed thousands of lives to be spent in situations of unnecessary inactivity, where families and individuals are trapped into a life on the edge, scraping through but marginalised on the edges of our society.

On the other hand, until a few years ago, working parents, mostly mothers, faced staggering childcare costs if they opted to go to work. Their wages ended up financing child care costs. So in Malta we introduced universal free childcare for all working parents.

The result was essentially a silent social revolution. The female employment rate in Malta increased from 52% in 2013 to 63.4% in 2018.

Yet this is not enough. Malta firmly believes that gender balance in politics would benefit not only women and female politicians, but also parties themselves and the rest of society at large. Our record in female representation where political decisions are taken is meagre, to say the least. In this regard and aware of the persistent under-representation of women in Parliament, we launched a reform proposing affirmative action that can help us bridge the gap.

An individual’s contribution to society and the relevance of one’s thoughts and capabilities should not be affected by gender. We have to come to terms that societal advancement has always been equated with empowerment and therefore discrimination ultimately affects a nations’s resilience and standing.

When I think about the future, my mind instantly goes to my daughters.

Considering that this year marks the 30th Anniversary of the UN Convention on the Rights of the Child, we should not only be reflecting on the milestones achieved in its implementation but more importantly on the areas that need to be addressed such as including children’s perspectives in all policies and decisions that affect them.

Malta is currently working towards fully incorporating the Convention into Maltese legislation to enhance the full realisation of children’s rights, making them portable and fully accessible.

Good health, well-being and quality inclusive education are fundamental human rights and are indispensable for the achievement of sustainable development and the realisation of the Sustainable Development Goals. In this vein, all children, boys and girls, should have access to good quality health and education to ensure their wellbeing.

Our objective is to equip all children with the appropriate environment and tools that allow for the acquisition by all, of the necessary skills and talents for citizenship and employability, in the 21st century and beyond.

Our commitment is to provide an education system where our children develop their personal and social potential to the fullest and acquire the appropriate knowledge, key skills, competences and attitudes through a value-oriented formation including equity, social justice, diversity and inclusivity. Such inclusion will result from ensuring that the educational environment is accessible to all in every manner.

While striving to implement a mainstream approach to education, including through the release of a national Inclusion Policy, Malta also recognises the importance of working towards equality of outcomes for all.

In this regard, we believe that this approach should be complemented by individualised and tailored supports, for example, for children with disabilities, to ensure, in the spirit of the SDGs, that no child is left behind.

Our commitment should be to continue providing the best to our peoples for a better quality of life and a brighter future. Sustainable development is all about current and future generations and not solely limited to specific economic sectors or social strata.

A generation implies that we are all involved and hence we are all expected to contribute to define our own future and to leave a better world to future generations.