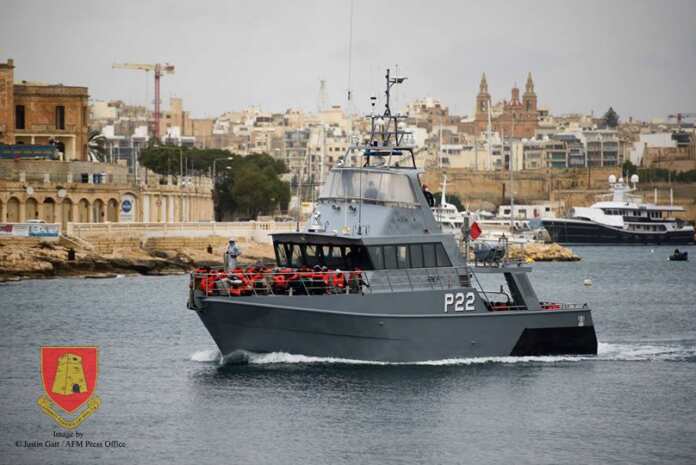 90 rescued asylum seekers stranded on an Italian Coast Guard vessel earlier today, will be brought to Malta this evening, the Armed Forces of Malta have told Newsbook.com.mt.

AFM’s spokesperson told this newsroom that the transfer took place this evening from the Italian vessels to an AFM patrol boat.

When asked about the estimated time of arrival, the spokesperson explained that given the numbers, this could mean the vessel disembarks those on board at around 11PM, at Haywharf naval base.

The Italian Coast Guard confirmed that the transfer had taken place. In their statement they said that, ‘On the merits of the SAR event under Maltese responsibility and the rescue of around 90 migrants, be informed that the transfer has just finished off Maltese territorial waters. The transfer took place from two IGC vessels to a Maltese patrol boat from where they will be taken to the place of safety as identified as the competent authorities.’

This development follows news of Malta’s refusal to accept 90 migrants rescued by an Italian Coast Guard vessel in its search and rescue zone, setting up a potential standoff with the new Italian government.

The Italian Coast Guard said it had picked up the migrants from a sinking boat off Libya at the request of the Maltese rescue coordination centre.

After, the Italian authorities requested that Malta sends an exact location for the two vessels to meet to transfer the immigrants. However, according to the Italian statement, Malta’s Rescue Coordination Centre did not respond.

Sources told Newsbook.com.mt that there are orders from high-ranking AFM officials to not let the vessel disembark in Malta.

The Coast Guard said its vessel was taking the migrants to Maltese waters, but Malta had refused to send a vessel to transfer them.

Malta has repeatedly insisted that migrants should be taken to the closest safe harbour, which in this case was the Italian island of Lampedusa.

The incident comes ahead of a meeting in Malta next week of European Union interior ministers to discuss a new migrant distribution mechanism.