Malta has stated its willingness to aid Libya resource-wise, in terms of education for those who work within maritime law and coordinating search and rescue operations.

Minister for National Security Byron Camilleri welcomed the Libyan Defense Minister Salahedin Namroush, and discussed the roles that the respective armed forces play in guarding against criminality and ensuring border control. Camilleri outlined that Malta is willing to help Libya in the sharing of expertise, logistics, as well as education related to illegal immigration.

Camilleri described these bilateral talks as a way for Libya to regain its footing. He stated that Malta and Libya enjoy a strong relationship based on respect and an honest effort to address issues facing the two countries.

Conference in Libya; Malta attends
A united Libya could be one of the wealthiest and prosperous countries – Bartolo 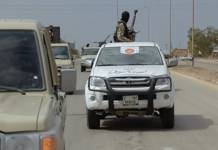 A recent conference in Libya brought together the highest authorities of the country, heads of institutions, members of parliament, academics, professionals, journalists, human rights organisations and the vast majority of the elders of tribes from all around Libya. Minister for Foreign and European Affairs Evarist Bartolo participated in this conference as well. The aim of the conference was to offer new hope for stability and peace in Libya.