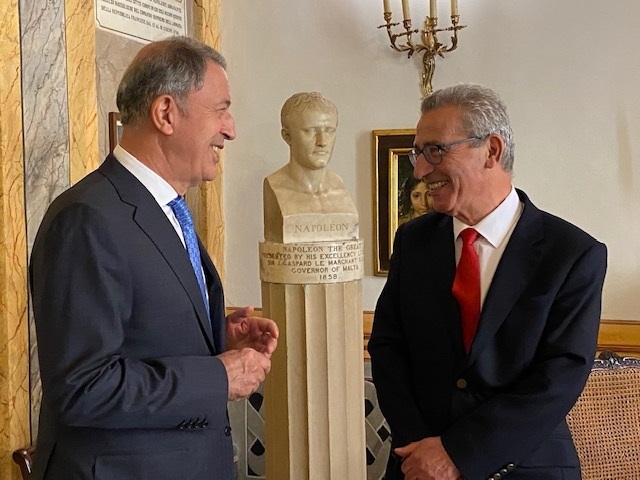 Strengthening relations between Malta and Turkey in the fields of investment, infrastructure, tourism and English language teaching were discussed between the Minister for Foreign and European Affairs Evarist Bartolo and the Turkish Minister of Defence Hulusi Akar, who is in Malta on an official visit

They also agreed that Malta and Turkey cooperate in the fight against international organised crime, money laundering, human trafficking, drug trafficking and terrorism.

Minister Bartolo expressed his concern about the strong tension in the Eastern Mediterranean and appealed for a peaceful solution, the search for a compromise and the common good, entering into negotiations and discussing ways towards a solution and the observance of international law, as well as discussing ways to resolve disputes between Turkey, Greece and Cyprus.

On Libya, Minister Bartolo said that Malta favours a single, united Libya in the hands of the Libyans themselves. War is not a solution. Libyans should be supported in finding an agreement between themselves so that their country, among the richest in the Mediterranean, will take the lead for the good of the Libyan people. Peace and security in Libya are also essential for peace and security in Europe and the Mediterranean, stated Bartolo.