Fourteen out of the 22 cabinet members present on Thursday in the urgent cabinet meeting called in the Office of the Prime Minister wanted Joseph Muscat to resign. We are reliably informed that over half the cabinet wanted its leader out in a meeting that lasted almost six hours. The meeting was also described as tense and at times agitated.

We are reliably informed that during the said cabinet meeting, Dr Deo Debattista was so overcome with the tension which was prevalent in the room, that he burst into tears. 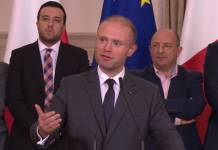