Newsbook.com.mt is proud to host a discussion featuring prominent Catholic journalist Austen Ivereigh. His most recent publication on The Tablet was an interview with Pope Francis which elicited several important points for reflection. Conversion, poverty and economy for the people and not just for the countries, good and perhaps less use of resources are among the subjects to be discussed on Newsbook.com.mt Live, Thursday 30th April at 1800h. 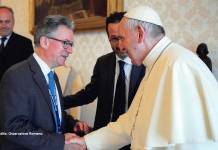 Newsbook.com.mt has teamed up with Catholic Voices Malta to further reflect on the Pope’s message of conversion, the dangers of populism and indifference, the need to be mindful of consumption and to have economies which serve humanity not use it. Sylvana Debono leads a discussion with Austen Ivereigh, Catholic voices Malta founder and former minister Tonio Fenech and Episcopal delegate and moral theologian Nadia Delicata.

Tonio Fenech to pay €7,500 in damages over oil scandal accusations

Staff Reporter   July 7, 2020
57 young drivers, ranging in age from 8 to 25 years old, have been approved by Malta Motorsport Federation (MMF) for phase 1 of the FIA MMF Young Drivers Training Programme which started on the 6th July 2000.