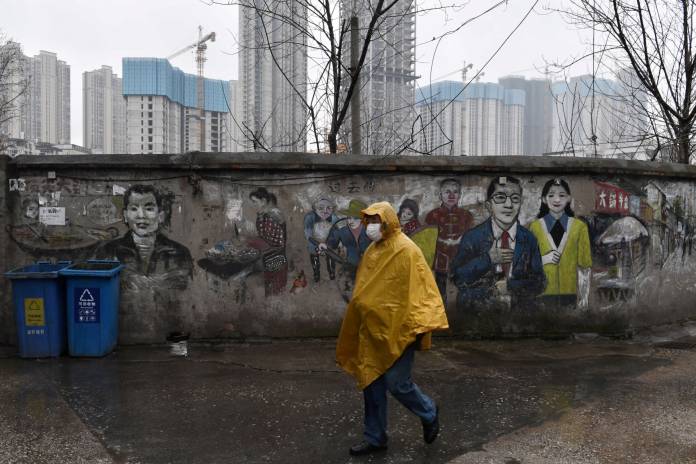 Mainland China reported 573 new confirmed coronavirus cases on Feb. 29, up from 427 the previous day and the highest daily increase in a week, the country’s health authority said on Sunday.

The new cases were concentrated in Wuhan, the city where the virus is believed to have originated. Wuhan identified 565 new infections on Saturday, amounting to nearly 99% of the total.

The number of mainland China deaths stood at 35, down from 47 on the previous day and the second lowest daily total in February. The total death toll in mainland China now stands at 2,870, the National Health Commission said.

Of the deaths, 34 were in Hubei province, where Wuhan is located and the epicentre of the outbreak, with the other in neighbouring Henan. Hubei accounted for 570 of the new cases.

The three new cases outside Hubei are the lowest since the National Health Commission began compiling daily numbers on Jan. 20.

The commission also said a total of 41,625 patients had already been discharged, amounting to 52% of the total number of confirmed cases on the mainland, though officials have warned of the risks that some could again develop symptoms.

In order to minimise the economic impact of the coronavirus, China has ordered all its regions to classify their districts into “high-risk”, “medium-risk” and “low-risk”, with the latter expected to end all traffic restrictions and allow everyone to return to work.

Hubei said on Saturday that 11 of its 103 counties had reported no new cases for at least 14 days, meeting the “low-risk” criteria. However, as many as 58 counties in the province are still deemed “high-risk”.

Ying Yong, general secretary of the ruling Communist Party in Hubei, said on Saturday that there had been “some positive changes” but the situation was still at a critical stage, and the province could not yet ease restrictions on outbound travel.

In speeches published on Sunday in Qiushi (Seeking Truth), the Communist Party’s theoretical journal, President Xi Jinping said China needed to take a “long-term view” of the outbreak and plug “loopholes” in its laws and emergency response mechanisms.

He said China must establish an emergency reserve and supply system for vital materials in order to ensure they can be deployed at critical moments.

The World Health Organization said in its Saturday bulletin that there were 6,009 cases outside China, up 1,318 compared to the previous day. A total of 53 countries have now reported cases, it said, with Mexico and San Marino the latest additions to the list.

Amy Borg   July 6, 2020
Nature Trust Malta (NTM‐FEE) has confirmed the nesting with the collaboration of different individuals and private entities.

John Paul Cordina   July 7, 2020
Attorney General Peter Grech has denied any wrongdoing it was revealed that he had advised the police in 2016 that the seizing of evidence from Nexia BT’s servers in connection with a possible investigation into Konrad Mizzi and Keith Schmebri would be a highly intrusive move.