A Luqa roundabout at the junction of three arterial roads – through which most traffic to and from the airport passes – is set to be upgraded into a multi-level junction next year, Infrastructure Malta announced. 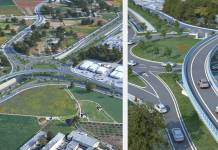 IM said that the two projects are expected to reduce travel times by up to 74% in all direction, and would also effectively remove two accident black spots by ending roundabout conflicts. The agency also said that the projects should reduce particulate matter emissions by up to 9.1 tonnes every year, and reduce carbon dioxide emissions by 33,000 tonnes annually.

The Luqa Junction Project would see a new flyover open an uninterrupted lane connecting San Tumas Road with Aviation Avenue. A cut-and-cover, single-lane tunnel would link the westbound carriageway of Council of Europe Road with San Tumas Road, allowing vehicles travelling from Santa Luċija to Qormi to do so without having to cross oncoming traffic.

New dedicated lanes at grade should provide connections from the northbound carriageway of Aviation Avenue to both other arterial roads, while the existing roundabout bypass lanes will be modicied to become dedicated lanes serving the remaining directions.

IM is aiming to obtain the relevant permits and to conclude the procurement process by the end of the year. Works on site are planned to take place next year, in conjunction with works on the airport intersection which are scheduled to commence later this year.