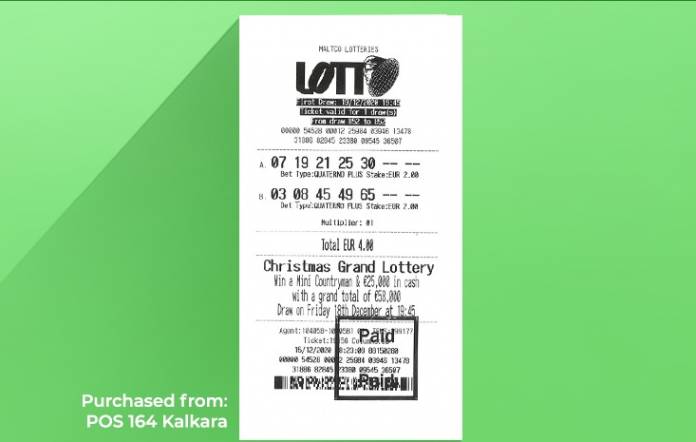 A special Christmas for a Maltese couple as they matched five out of the eight drawn numbers in the 19th December Lotto Quaterno Plus draw, hitting the first category jackpot of €1,160,000.

The player, who purchased the winning ticket form Kalkara on Friday 18th December, had decided to try her luck on the Quaterno+ knowing that the jackpot is over a million. Initially, entering the POS to purchase a Grand Lottery ticket, the player has chosen to also play the same Quaterno+ numbers played for the last three weeks.

The player made the jaw-dropping discovery on Saturday night whilst watching the draw televised on TVM. The player’s partner who claimed the prize from Maltco Lotteries offices on Monday 21st December, was presented with a cheque of €1,160,000.

Interviewed by Maltco’s Head of Marketing & Communications, Caroline Attard, the winner said that he was shocked and frightened at the same time to hear his partner screaming in front of the TV while also on telephone. While shouting at the top of her voice, “We are now millionaires!”, the player couldn’t believe that they had matched the five numbers.

Maltco congratulates the lucky couple and wishes all its players and their families all the best for Christmas and a happy new year.

Lotto Quaterno+ is a widely popular weekly draw-based lottery game offering copious attractive prizes including a first category progressive jackpot starting at €250,000 for next Saturday’s 26th December. Choose your favourite numbers online from the website or from your preferred agent. What a way to end 2020!

For more information you may email info@maltco.net, visit the company’s website and social media pages or call Maltco’s Helpline on 23883333.