However, the statistics held by the European Centre for Disease Prevention and Control (ECDC) do suggest that the low proportion of positive tests is largely due to one of the highest testing rates in the EU. On the other hand, the proportion of positive cases is now at the lower end within the 27-nation bloc, where many countries have been seeing numbers increase in recent weeks while Malta’s numbers remained largely stable.

3.36% of Covid-19 tests in Malta turned out to be positive, the fifth lowest rate in the EU: the lowest rate of 1.73% was registered in Denmark. At the other end of the scale, 48.6% of tests carried out in Poland confirmed the presence of Covid-19.

The fatality rate in Malta, however, is higher than the number of new cases would suggest: at 8.9 deaths per 100,000 people over two weeks, Malta registered the 16th highest death rate within the EU. 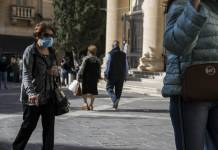