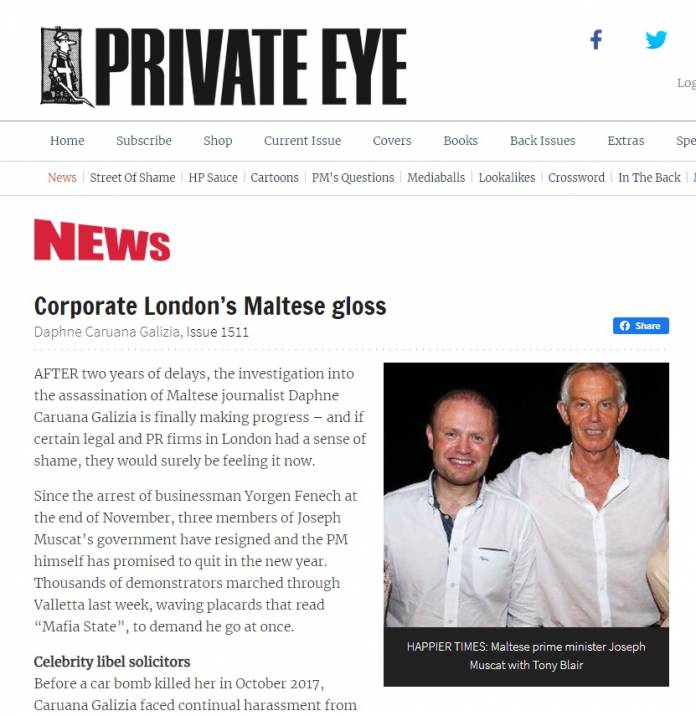 The well known British publication ‘Private Eye UK’ said that after having been cloaked in obscurity for a whole two years, the abominable assassination of Daphne Caruana Galizia is slowly getting disentangled.  In an article entitled ‘Corporate London’s Maltese Gloss, “That the Maltese journalist had a lot of local enemies is no news. But her investigations into the Maltese elite’s business links also earned her continual harassment from English lawyers” wrote Private Eye.

Celebrity libel solicitors Mishcon de Reya and Schillings were put on her case for her stories on the sale of the Golden Visas. Schillings, of whom Private Eye writes that their slogan I ‘Find the fix’  termed as “grossly defamatory” any allegations of connections with money laundering – the very same allegations that were proven true and which led to the resignation of the same minister.

Meanwhile, Joseph Muscat hired Chelgate, known as a ‘reputation manager’ in a damage limitation exercise as a veritable avalanche of damning information was being revealed. wrote Private Eye. The publication said that in an effort to muddy the waters and throw people off the scent, theories that Vladimir Putin and Azerbaijan President Ilham Aliyev had conspired to assassinate Caruana Galizia, were communicated through a private intelligence firm in Luxembourg called Sandstone. Although this firm was described by Chelgate as an “achingly honest” firm, it was evident, according to Private Eye, that such theories were nothing more than a diversion strategy “from the impending reality that the island’s elite was intricately involved in the killing of a voice of truth”.

In this hazy environment of legal threats and fake news, Daphne’s son Matthew Caruana Galizia expressed his disappointment with corporate London: “They see a mafia state like Malta as a business opportunity rather than something that has to be vanquished”.

PL should not tolerate ‘mistakes’ from its own – Fearne

Monique Agius   January 19, 2020
Deputy Prime Minister and PL deputy leader Chris Fearne took the stage before Partit Laburista leader Robert Abela was scheduled to speak in his first rally after being sworn in as prime minister.

Mario Schiavone   January 18, 2020
Pope Francis has appointed Dr Francesca Di Giovanni, currently an official of the Secretariat of State, as under-secretary for the Section for Relations with States....