A man shot dead by police after he stabbed people in south London had been released from prison in January.

Sudesh Amman, 20, was released around a week ago after serving half of his sentence of three years and four months for terror offences.

He was under active police surveillance at the time of the attack on Streatham High Road, which police believe to be an Islamist-related terrorist incident.

Three people were injured but none are in a life-threatening condition. Sudesh Amman was wearing a fake bomb vest when he attacked people on a busy street in the south London area of Streatham on Sunday afternoon. 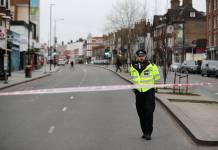 Amman, from Harrow, north London, had been released from prison just days earlier after serving time for spreading extremist material.

“No arrests have been made and enquiries continue at pace,” the Metropolitan Police said.

Prime Minister Boris Johnson said the government would announce further plans for “fundamental changes to the system for dealing with those convicted of terrorism offences” on Monday.

He said the government had moved quickly to introduce measures strengthening its response to terrorism, including longer prison sentences and more money for police, following the attack at Fishmongers Hall, near London Bridge, in November.