After Wednesday’s results the Labour Party has managed to hold on to 14 localities in Malta and Gozo while causing upset for the Nationalists by winning St Paul’s Bay and Valletta. This brings their total to 16.

The Nationalists on the other hand managed to hold 7 of its original local council seats.

This is just the first day of the Local Council Elections with two more days to go until all of Malta and Gozo’s Councils are decided. 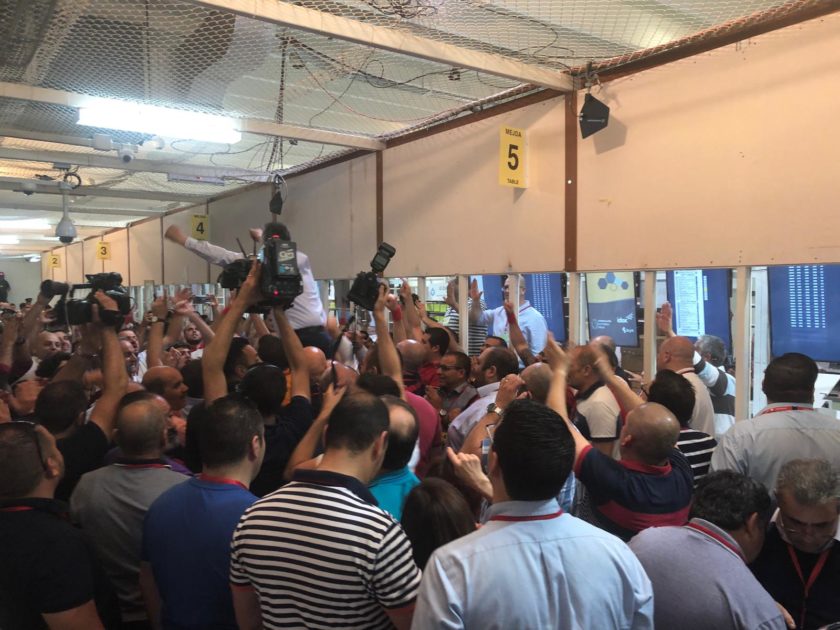 Results are coming in thick and fast now.. 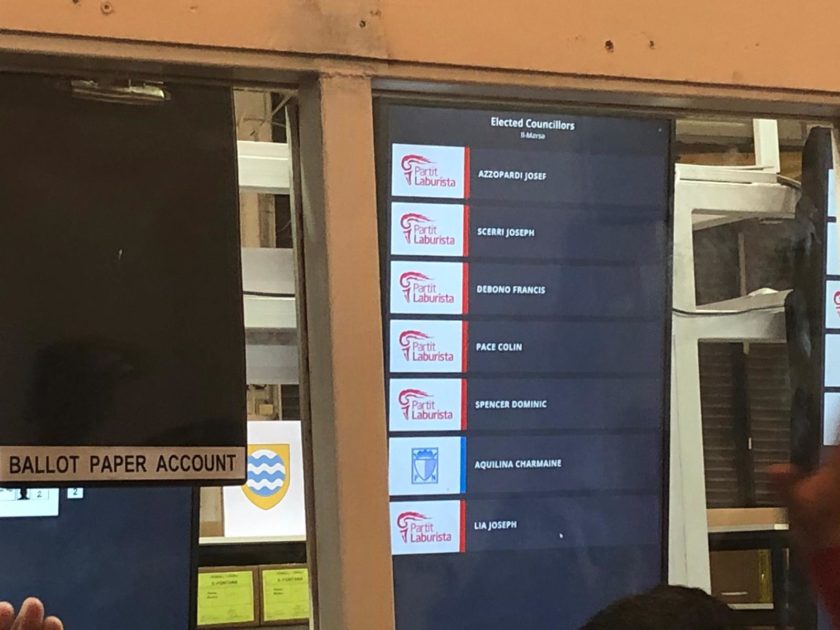 According to Net News, Iklin and Fontana are held by the Nationalist Party.

Mellieha has declared its 10 councillors for the locality and it looks like Labour will hold the council once again. LABOUR HOLD 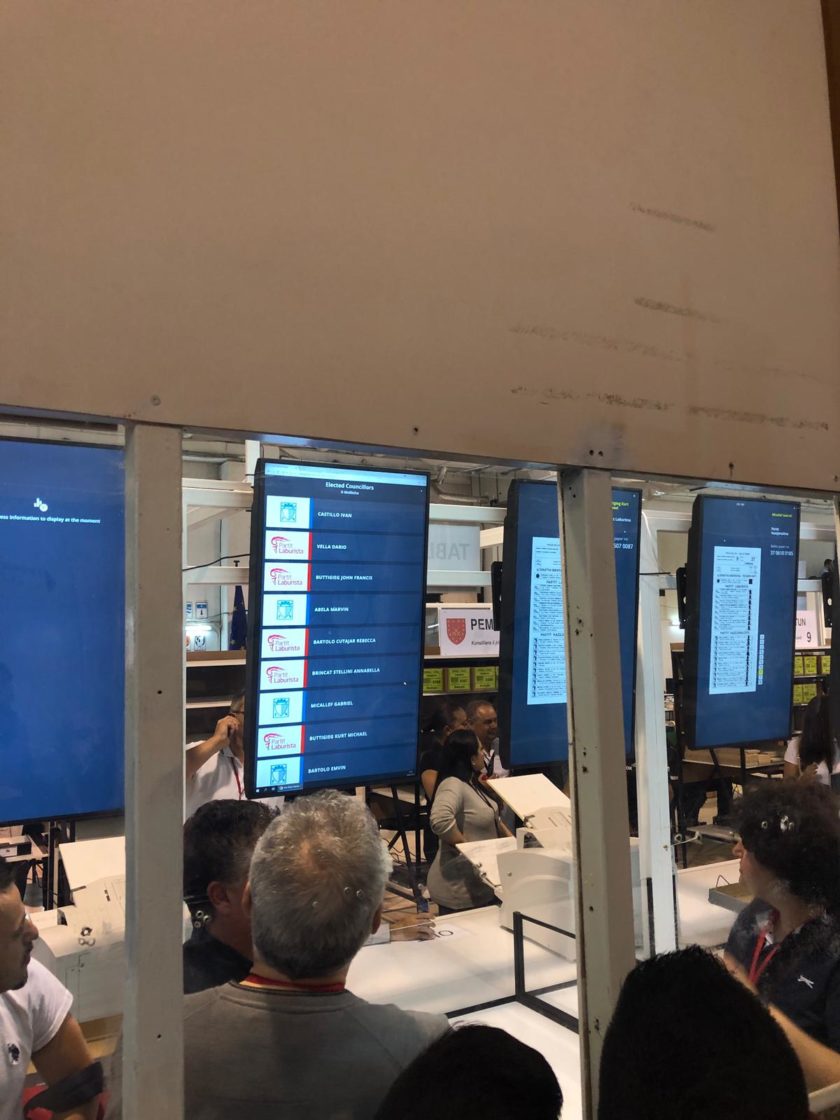 Here is the breakdown on the Valletta local council election.

The Labour Party won by 1884 to 1632 votes to the Nationalists. Partit Demokratiku also won 37. (These numbers will be verified.)

Balzan’s local council remains blue with 1765 to the Nationalists compared to 680 for the Labour Party. NATIONALIST HOLD

The results of Dingli are official. The local council will stay a Labour locality. LABOUR HOLD

The adjudicators are telling the crowds to get back in order for those behind the perspex to continue counting.

Valletta Supporters are already getting excited about the result.

Tourism Minister Konrad Mizzi is among them.

The Prime Minister is already announcing the result that PL has won the locality. Valletta was formerly a Nationalist run council.

The results have been declared for Pembroke and it is set to return to Labour. LABOUR HOLD

Results for the Valletta Local Council are almost ready to be declared.

A lot of people are interested in the Valletta vote result…

The local councils for Ghajnsielem, Iklin, Imqabba and Ta’ Xbiex are at an ‘advanced stage’ and expected to declare soon.

Images from the counting hall in Naxxar this evening.

First results for the local council elections are expected imminently as the predictions for the PN seem increasingly dire. Observers in the political millieu are predicting a defeat ta the polls, even heavier than that suffered in the EP elections.

The results for the Valletta an the St Paul’s Bay Local Councils are of particular interest since the difference between the parties is particularly tenuous. Early indications from the counting hall point towards a Labour Victory in St Paul’s Bay. If the EP election trend persists and is mirrored in the local council elections, the net result could well be that the PN loses the majority representation in other localities. A pro-PL trend could also mean a PL win in Mosta, San Ġwann and Siggiewi.

Newsbook.com.mt’s sources noted that the  turnout for the Local Council election was 60.46%, substantially lower than the 72% who voted in the EP elections. The same sources said that it could be that a number of Nationalist voters decided to vote in the EP election to support Roberta Metsola and David Casa who were under constant attack from the PL and were not top of mind of the PN leadership. These same voters then decided to boycott the Local Council elections.

The Gozitan Council will now be a Nationalist led council with 3PN local councillors and 2 Labour Councillors. 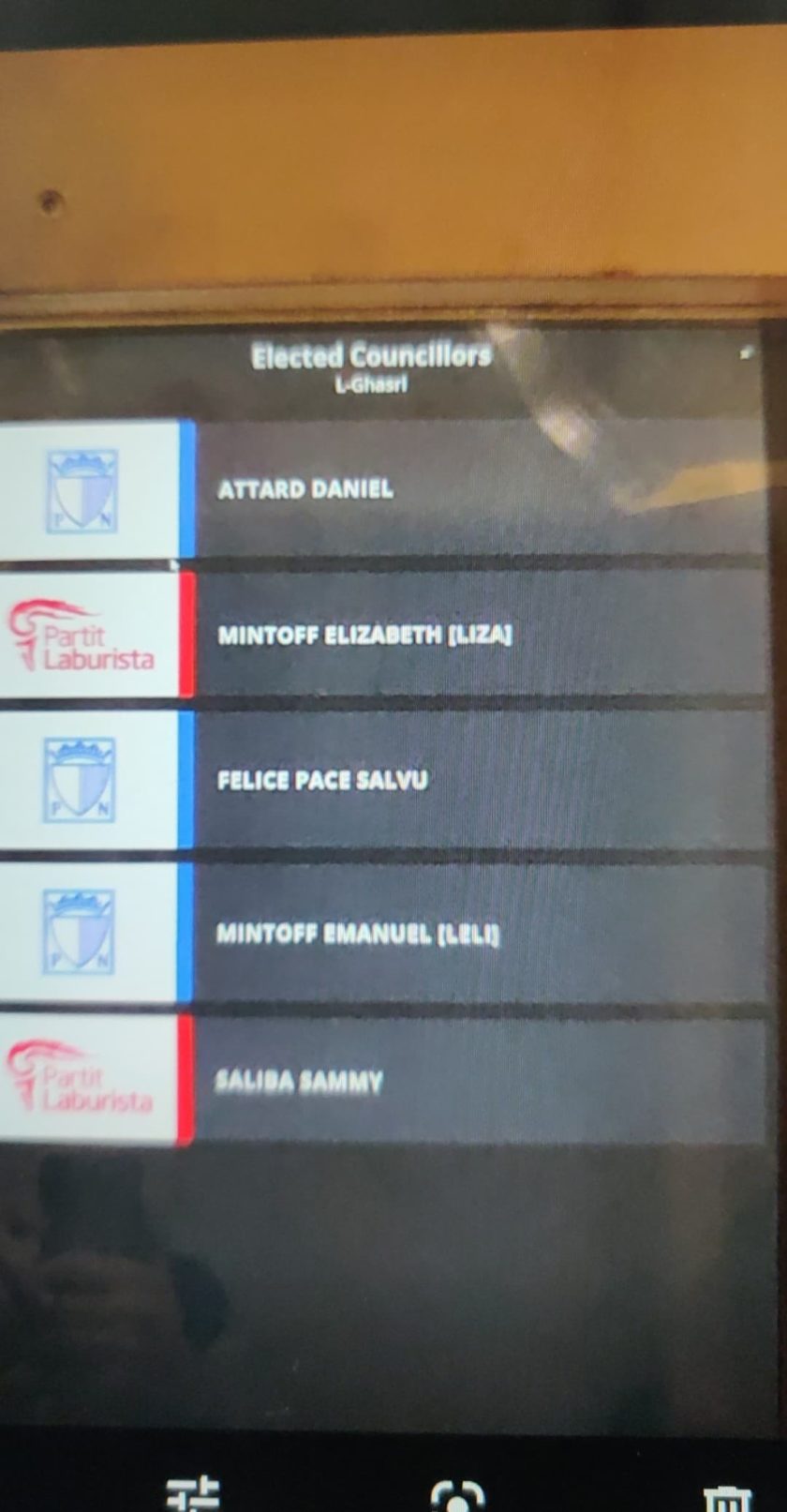 There was some tension just as the vote was announced…

Ballot boxes from 23 different localities in Malta and Gozo have been opened in the Naxxar Counting Hall to begin the process that should give the result of the Local Council elections held last Saturday. The electronic vote counting has been fine-tuned, after some teething problems notices last Sunday were identified and solutions adopted.

Party officials are in the Counting Hall taking note of the way votes are marked. This can give an unofficial result as well as serve as a counter-check of the electronic counting. The scanning process takes place after the votes are sorted.

If the voting trends are similar to those registered in the election for the European Parliament, it is expected that the Partit Nazzjonalista will lose control of a number of Local Councils in different localities.

The counting is being spread over three days: today Wednesday, tomorrow Thursday and on Friday.

Newsbook.com.mt will keep you updated.

Sarah Borg   February 17, 2020
The European Parliament's call for applications for the European Citizen’s Prize 2020. The call is also open for those who would like to nominate somebody else for exceptional projects they have carried out.