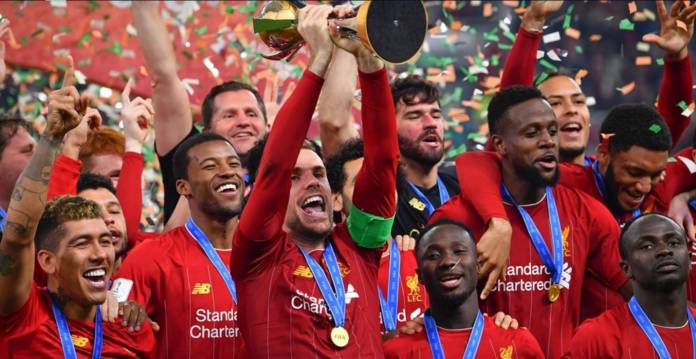 Liverpool added the Club World Cup to the list of trophies that they won in 2019. At the Khalifa International Stadium in Qatar, Liverpool beat Brazilian side Flamingo in extra time. Roberto Firmino showed composure to cut inside centre back Rodrigo Caio and score. The reds also won the UEFA Champions League and the UEFA Super Cup this year. Manchester City had to fight back to beat Leicester City after Jamie Vardy had given the Foxes a surprise lead at the Etihad Stadium in Manchester. Vardy out-paced Fernandinho to chip past Ederson in the twenty second minute. Riyad Mahrez fired in the equalizer eight minutes later. Gundogan scored from the penalty spot three minutes before half time. Gabriel Jesus made sure of the the three points for City when he scored the third goal in the sixty ninth minute. City neighbors Manchester United suffered a shock defeat against bottom side Watford. This was the Hornet’s first home win in the league since April. A mistake by David de Gea helped open the score when the keeper allowed Sarr’s shot to bounce through his arms and into the net. Watford doubled the score when Deeney scored with a penalty four minutes later. Chelsea took the spoils from the London derby against Tootenham Hotspur with two goals from Willian in the first forty five minutes.

Lazio beat Juventus in the Italian Super cup in Riyadh, Saudi Arabia. The Coppa Italia winners took the lead after sixteen minutes through Luis Alberto, Juventus drew level on the stroke of half time when Paulo Dybala found the net after a save from Lazio goalkeeper Strakosha. Lazio went ahead with a great strike from Senad Lulic in the seventy third minute. Danilo Cataldi made it three for Lazio with an exquisitely taken free-kick in the ninety fifth minute. This was the second defeat for Juventus against lazio in a month, both lost 3 – 1. Inter regained top spot in the Serie A on goal difference when they beat Genoa 4 – 0 on Saturday. Romelu Lukaku  scored two goals as the Nerazzurri condemned Genoa to another defeat which leaves them bottom of the table with 11 points. Gagliardini and Esposito were the other two goalscorers for Inter. On Sunday AC Milan suffered their heaviest defeat for more than 21 years when they were beaten by Atalanta 5 – 0. Goals by Gomez, Pasalic, two from Illic and one by Muriel put Atalanta fifth in the table.

RB Leipzig are top of the Bundesliga and for the first time since the reunification of Germany a team from the old East Germany will be winter champions. Leipzig were founded 10 years ago are in their third season in the top flight. Leipzig fell behind against Augsburg when Niederlechner opened the score for the visitors after eight minutes. Three goals from Laimer, Schick and Poulsen in the last thirty minutes of the game gave the home team the important three points which put them ahead of Borussia Monchengladbach who could only manage a draw away to Hertha Berlin. Bayern Munich who confirmed manager Hansi Flick till at least the end of the season climbed to third in the Bundesliga. On Saturday they beat Wolfsburg 2 -0 to move within four points of the leaders. Two late goals from Zikzee and Gnarby gave the Bavarian’s  the all important three points. Borrusia Dortmund remain in fourth place after their defeat away to Hoffenheim on Friday night. It was Borussia who took the lead after seventeen minutes when Mario Gotze squeezed a shot over the line. Dortmund failed to seal the game and two  goals from Adamyan and Kramaric gave the home side a famous victory.

Barcelona remain top of the table after an emphatic win of Alaves. The result meant that Barcelona finish the year unbeaten in the league at the Nou Camp. They managed twenty four and four draws at home in 2019. Lionel Messi scored his thirteenth goal in thirteen games in La Liga this season. He has scored fifty goals in this current year, he has reached that watershed in nine of the past ten years. Messi scored the third goal for Barca after Griezmann and Vidal had scored for the Catalans. Pons had pulled one back for Alaves before Messi and Suarez made sure of the result. Real Madrid failed to win at home against Athletic Bilbao in the last game of La Liga for 2019. Madrid had eight shots on target but they couldn’t find the goal to lift them level on points with Barcelona. Atletico Madrid had to be at their best to take the points away at Real Betis as the home team had dominated the first forty five minutes of the game. It was the introduction of the Argentine Angel Correa that changed the game for Atletico. Correa scored just two minutes after coming on and then provided the assist for Morata to score six minutes from time. Marc Bartra grabbed a consultation goal for Betis in the third minute of added time. This was Atletico Madrid’s first win away from home since October.

Ups and Downs in the football weekend