Businesses which have reopened as from Monday, as announced by authorities, will continue to benefit from the COVID-19 economic measures. This has been announced by the Minister for the Economy, Investments and Small Businesses, Silvio Schembri during a press conference on Friday.

During the press conference, the Economy Minister gave also the latest updates on the economic measures aimed at supporting businesses affected by the COVID-19 pandemic.

The total number of queries received until today by Malta Enterprise is 58,000 an increase of 5,300 queries over last week.

Regarding the Teleworking measure;

From this scheme €150,000 have already been disbursed.

Regarding the wage Supplement measure;

Type of businesses which have applied:

From the 19,885 applications received, 88,461 jobs are safeguarded in Malta and 4,653 in Gozo. This means that a total of 93,114 jobs have already been safeguarded by the measures as announced by the Economy Minister.

Until today, €33.6 million have been disbursed to companies/employees which fall under Annex A.

In the case of companies falling under Annex B Minister Schembri said that 3,047 applications have been received and €1.5 million have been disbursed.

During the press conference, Economy Minister Silvio Schembri has also referred to statistics published today which confirm that Malta offers the best assistance to those businesses hit hard by the COVID-19 pandemic.

Watch: Wage supplement will be distributed during May and June 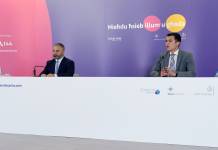