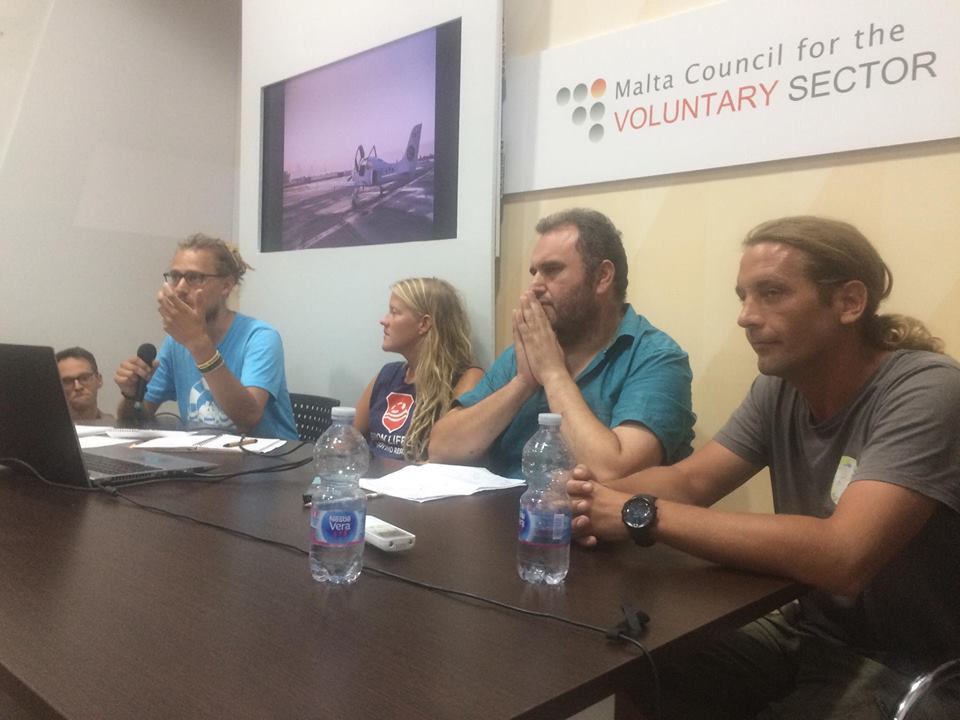 In her closing remarks Neeske Beckmann said that she wished that they were saving people rather than discussing freeing ships in Malta. Beckmann is a volunteer from Mission Lifeline and one of the speakers in the public discussion held on Friday evening.

Tamino Bohm from Sea-Watch explained that how their organisation carries out its civil sea rescue. He said that the NGO is based in Malta for logistical reasons and that the volunteers are exchanged in Malta when the boat comes in from patrolling. He explained how the people volunteering with their organisations are professionals with actual licence in their field. Sea-Watch sustains itself by the various donors which are donating small amounts such as €5 or €10 sometimes there are few people donating €100. Others commit themselves to donating small amounts per month. The German Protestant Church supports one third of the expenses to cover the operations by Moonbird which amount to some €100,000.

Markus from Sea-Eye explained how their boat carries out search and rescue and saying that sometimes its impossible to rescue them all. He also explained that when they people in distress do not require to be saved immediately, they would wait with them until the coastguard arrive.

In a reply to a question from Newsbook.com.mt whether Transport Malta has clarified with Sea-Watch and Sea-Eye which regulations have been breached, Bohm said that while a lot of arguments were brought up, none were applicable to Moonbird and Sea Watch Vessel 3. He argued that while what the authorities said that search and rescue is only a state operation, Moonbird was not operating search and rescue in Maltese area. Sea Watch spokesperson said that they have asked the relevant authorities to provide them with a map of Malta’s search and rescue zone which they have not to date obtained. Furthermore Bohm argued that if they had to encounter a ship in distress in Malta’s search and rescue they would report it to the relevant authorities as any other private company is obliged to do and that would fall under the responsibility of the Maltese authorities to help them. Bohm said that the reasons seem to be political rather than legal. He confirmed that Sea-Watch would consider a court case given that they are being held in Malta without basis.

When the floor opened for those present to ask questions, a woman from the audience heckled the representatives by making several statements, which were replied by Bohm. Bohm clarified that Tunisia is indeed the nearest port however not the “port of safety” as defined by SOLAS Convention.

The representatives spoke as well of the death threats and hate speech they have received over the past few days.

A woman from the audience thanked the NGOs for the “invaluable work” that they are doing.

The three non-governmental organisations involved in humanitarian sea rescue and currently blocked in Malta, invited the public to meet them in a public meeting held in Valletta on Friday. Tamino Bohn from Sea-Watch, Neeske Beckmann from Mission Lifeline and Markus Groda from Sea Eye are expected to explain in detail their work as well as reply to any queries which those present may have.

Sea-Watch conducts civil search and rescue operation in the Central Mediterranean providing emergency relief capacity. As an organisation it lobbies for legal escape routes and for the removal of the root causes for migration. The non-profit organisation is financed solely through donations. Its vessel Sea-Watch Vessel 3 was also prevented from leaving the harbor in Malta due to pending investigations according to Transport Malta. Its aircraft Moonbird was blocked from flying out of the country. However the authority failed to specify which law was breached by both Sea-Eye and Sea-Watch.

Mission Lifeline’s vessel MV Lifeline is held in Malta due to the ongoing trial against the Captain Claus-Peter Reisch after docking the vessel which was carrying 234 people that were saved from drowning.

Today the Aquarius saved the lives of 25 people including those of 6 women in international waters.