The NGO Repubblika is remembering the 101 coronavirus victims. The commemoration was held in front of Castille,the Prime Minister’s office, in Valletta.

The death toll in Malta has surpassed the 100 as on Monday evening three deaths were announced.

What are the levels of infection that would overwhelm the hospital’s resources? – Repubblika

In a statement, Repubblika asked about the levels of infection that would overwhelm the hospital’s resources, asking whether we’ve already reached that point. It pointed out the need for the public to know more.

It also asked about the impact that dedicating resources to the pandemic have had on curing other hospital-necessary ailments: such as cancer, heart diseases, diabetes and other conditions.

Repubblika went on to say that the Government is irresponsible, noting the launch of Christmas in the City, encouraging crowds to go shopping in Valletta. It stated that Minister for Health Chris Fearne then said that he was not asked for his opinion on it. Repubblika went on to denounce Prime Minister Robert Abela for such decisions, describing them as “insanity”. 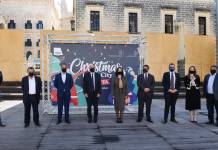 It concluded its statement by appealing for wearing masks, maintaining social distancing, and frequent hand-washing. Furthermore, it appealed for avoiding crowds, since it’s obvious that “Abela’s Government does not care about us”.