Prime Minister Robert Abela has announced that he is now the subject of a magisterial inquiry, along with AFM officials, after Repubblika filed criminal complaints against them, blaming them for the voluntary homicide of migrants who lost their lives in the Mediterranean Sea this week. The Prime Minister asked the police to investigate him.

He started tonight’s press conference by saying that he wished to praise the work done by the Armed Forces of Malta, after Repubblika filed two criminal complaints against AFM. Repubblika’s complaints accused AFM, particularly the 11 officials of vessel P52, of letting migrants die.

Abela said that he approached Acting Police Commissioner Carmelo Magri at the Police Headquarters today, asking the Police Force to investigate him. A magisterial inquiry is to be launched into the allegations made against the 11 AFM officials, the Brigadier in question, and the Prime Minister himself.

The Prime Minister stated that he has a clean conscience, as he has been doing his utmost to safeguard the health and wellbeing of the Maltese nation.

He said that no obstacle will change the Government’s stance on the immigration issue, reiterating that due to the current coronavirus crisis, the Government does not have the resources needed to rescue migrants and provide them with a safe place.

Repubblika’s reaction to the Prime Minister’s press conference was that he is trying to turn victims’ deaths into an accusation against those who dare criticise him. The NGO said that the Prime Minister wanted the Maltese to forget that 12 people died in Malta’s seas because of his decision for the Armed Forces not to save the migrants.

The NGO noted how the Prime Minister did not allow journalists to ask him questions, as journalists were not provided with a live link to connect to the press conference, as is usually being done during this pandemic.

According to the NGO which strives to stand up for the rule of law, the Prime Minister mixed the coronavirus pandemic with perishing lives at sea, something which, according to them, was uncalled for. They insisted that in no way are they trying to disrupt the authorities’ struggle against the pandemic. However, Repubblika claimed that the Prime Minister was wrong in implying that Repubblika should keep its mouth shut so that people do not get infected.

They expressed surprise at the Prime Minister’s mention of a possible life sentence for himself should he be found guilty. The NGO said that it is now up to the state institutions to investigate whether Abela or others were responsible for these deaths in Maltese territory.

Whoever is innocent, said the NGO, should not fear being investigated. It noted how neither the Prime Minister, nor the Armed Forces, denied the international claim that they had sabotaged the boat carrying migrants.

Lawyers Jason Azzopardi, Andrew Borg Cardona and Paul Borg Olivier are representing Repubblika. The Prime Minister mentioned Azzopardi in his press statement, and said that since Azzopardi was behind this, it means that the Opposition was also implicit.

Azzopardi said to Newsbook.com.mt, “I am a lawyer. I do not comment about my professional work. Nowhere in the democratic world does a governing party, or worse, the Prime Minister, issue attacks vs the lawyer of a client filing action vs him or his Govt. This is only done to intimidate and is the hallmark of totalitarian regimes. In the words of Dante: ‘non ti curar di lor, ma guarda e passa.'”

ECHR refuses to give interim measures

The European Court of Human Rights refused Repubblika’s urgent request to give an interim measure to the Maltese and Italian authorities to leave the refugees who run away from Libya stranded in the Mediterranean.

Repubblika made this request on Wednesday and received the response today, saying it was disappointed with the Court’s refusal, even though it had expected this outcome.

Prior to this press conference, Opposition Leader Adrian Delia had issued a press release of praise towards the Armed Forces of Malta and its work, calling it Malta’s shield. This press release came after Delia visited the AFM to thank them in person.

Brigadier Jeffrey Curmi, who is being investigated in this magisterial inquiry, explained to Delia along with other high ranking officials how the different sections of the AFM operate, and showed him the resources used in their operations.

Delia expressed the Opposition’s support towards the financial incentive being given to Maltese soldiers who are offering their crucial service in these trying times. 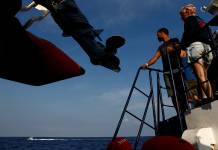