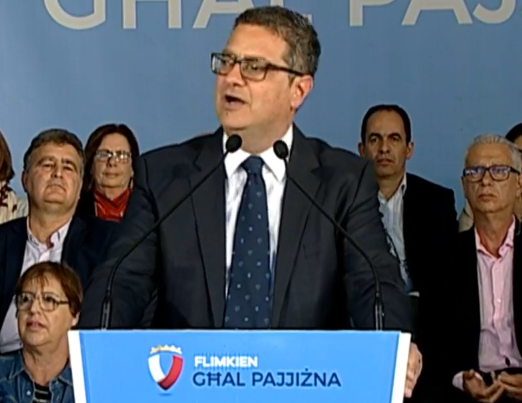 The Head of the Nationalist Party Adrian Delia has insisted that political responsibility needs to be taken in the case of the two soldiers who are accused of murdering a man from the Ivory Coast and wounding two others.

Linking the two together, Delia said that like when the Ombudsman’s report explained that promotions in the Armed Forces were politically motivated, there should be political responsibility shouldered by the government.  This was important given that Malta was a European Union member.

The leader was speaking at the Nationalist Party political activity in Spinola Bay in St Julians in which he spoke on behalf of a number of PN candidates for the European Parliament election.

Delia went on to say that there were times when the Government was losing its social aspect but now it was hindering the moral standard of the people, especially in light of the murder of Daphne Caruana Galizia and the killing of people because of their skin colour.

“One of the accused had a relapsing case”

He mentioned how one of the defendants had a relapsing case. He said that although the case had been concluded and the judgment given prior to their engagement in the armed forces, there is no knowledge of what the incident was that led to the case. Delia asked if AFM had even carried out an internal investigation He insisted that the Nationalist Party continues to push for a full investigation.

Delia made an impassioned appeal to Nationalist voters to vote out against corruption and against Malta’s bad name.

The government seized power from councils

The PN leader also claimed that they wanted to give the power back to the St Julian’s local council because they did not have that power to carry out road works. He raised the case of where the council had employed an architect to develop plans for the junction at St Julians.

He said that after presenting the plans for the junction, the Minister for Infrastructure Ian Borg undermined the authority of the council and conducted the roadworks independently.

Finally, reacting to the Prime Minister’s billboard in which he says ‘Be with Me Again,’ Delia says that the PN candidates should instead ‘Be with The People’