Abela was testifying before Magistrate Joe Mifsud who is leading the magisterial inquiry into the allegations of boat which was carrying 66 people was allegedly sabotaged by the Armed Forces of Malta, on Monday. The incident happened between 8 and 10 April. AFM officials allegedly sabotaged the engine of a boat in distress in the Maltese search and rescue region.

Fielding questions from the journalists outside court, Abela stressed that he did not agree that there was a push back. He explained that the private vessel was used since the state’s naval assets were overseeing five other distress cases.

Abela said that the AFM were engaged in five search and rescue missions over the Easter weekend. “Private vessels had to be used to ensure that no lives are lost,” Abela claimed.

Referring to Dar al Salam the private fishing trawler which was used in the push back and was used again last week to rescue migrants which were later transferred to a Captain Morgan vessel chartered by the government to host the asylum seekers.

Abela also mentioned a discussion held between him and EU Commission President Ursula Von der Leyen last Friday, in which he reiterated Malta’s position that the ports will remain closed, even though the EU would like Malta to take in the migrants, and then discuss relocation plans afterwards.

He emphasised that this issue has nothing to do with racism, as the main issue at stake, according to the Prime Minister, is that Malta cannot take any more migrants. 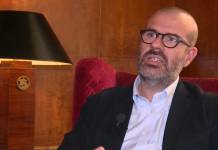