Wednesday afternoon, Prime Minister Robert Abela announced that the government will appoint a committee to investigate and give an overview of the current construction sector in Malta.

Prime Minister Abela announced this following the accident happened on Monday in Ħamrun where Miriam Pace was found dead under the debris of her house that collapsed due to ongoing excavation works on an adjacent construction site.

The committee will include four members: Judge Emeritus Lawrence Quintano, Architect Mario Cassar, Lawyer Mark Simiana and Adrian Mifsud who is a lecturer at the University of Malta specialising in structural engineering and geotechnical engineering.

The committee has to propose a set of recommendations which are to be handed to the Prime Minister so that a regulatory framework within the construction industry is established with immediate effect.

Asked about the petition launched by Newsbook.com.mt Prime Minister Robert Abela said that it is a petition that reflects the sentiment of many including himself.

We really want to be ‘safe as houses’ – Sign the petition 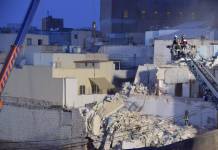 When questioned about whether Minister Ian Borg should assume political responsibility for the failure of the construction reforms the government introduced in July 2019, Prime Minister Robert Abela said he did not want to turn the issue into partisan one.

The Prime Minister said that there the reasons why the accident happened is yet to be determined and that there are investigations and a magisterial inquiry underway to establish what caused the house in Ħamrun to collapse.

Robert Abela also said that the institutions are doing their job but he also has to ensure that what happened in Ħamrun on Monday does not happen again as it was an accident which left the whole country in shock.

In an address during a business breakfast in St Julian’s, the Prime Minister emphasised that economic development should not come at the cost of human life.

The Prime Minister added that this episode should not be taken lightly. It is a tragedy which left a family without a mother, a man without his wife. But most of all, it is an incident that took place while a woman was at the comfort of her own house. Abela did not stop at the sad sentiment expressed by many. Instead he maintained that it is the right of everyone to know the facts behind this case. Ultimately, he added, those who are responsible should face the consequences dictated by justice.

The event was organised by the MCESD and the National Productivity Board.